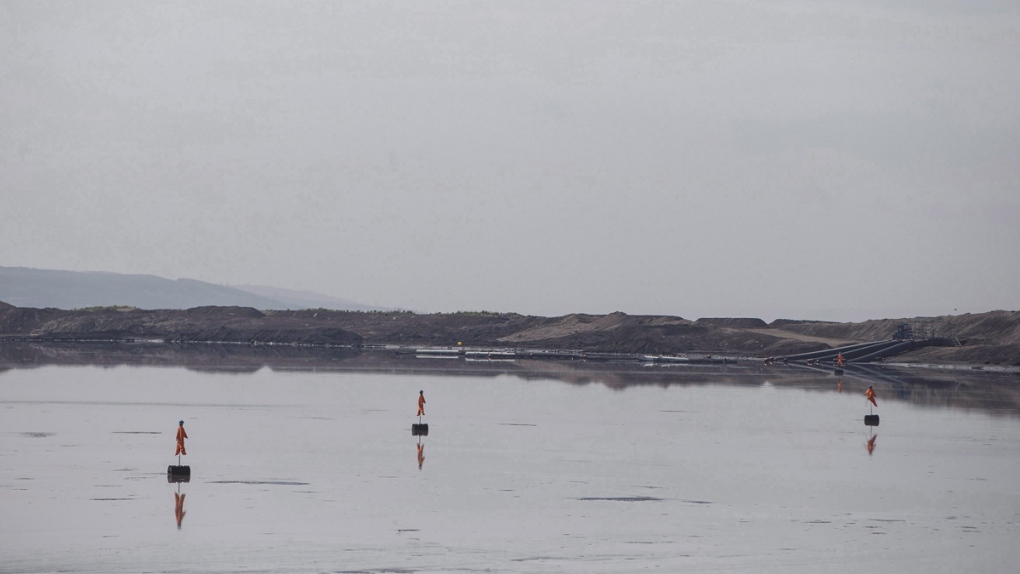 CALGARY -- Alberta's energy regulator has approved an oilsands giant's plans to manage its vast tailings ponds despite ongoing concerns about their reliability.

"(Opponents) raised concerns with the aquatic closure outcome and uncertainties with the proposed technology," Alberta Energy Regulator said in its decision on Suncor Energy's (TSX:SU) Millennium mine. "The (regulator) shares those concerns."

While the regulator has added a series of reporting and monitoring requirements, Wednesday's decision approves substantially the same plan it turned down last spring.

The plan still relies on so-called end-pit lakes, in which treated tailings are pumped to the bottom of an engineered basin and capped with fresh water. The technology has often been used for other mines but never for oilsands tailings.

It also proposes a reclamation timeline which will require some sort of monitoring well into the next century.

"Those core issues were not addressed and they've kind of just evaporated now," said Jodi McNeill of the Pembina Institute, a clean energy think-tank.

The regulator said in its ruling that the Suncor decision is not to be considered a precedent. But plans from seven other projects from six producers are being reviewed and McNeill said most of them have the same problems as Suncor.

"It ultimately is (a precedent)," she said.

The approval sets a number of reporting requirements to ensure Suncor meets a series of deadlines.

Suncor has until 2024 to clean up all 314 billion litres of tailings produced before 2015.

By that time, the mine will have produced another 281 billion litres of tailings. That total must decline to 147 billion litres by 2033, when the mine is scheduled to close.

All tailings must be gone by 2043, with ongoing monitoring to ensure the site remains stable and develops a healthy ecosystem.

"There are risks that Suncor will not achieve this profile," the regulator said. "The ability of Suncor to achieve the profile is dependent on successfully implementing its (tailings management plan)."

In addition to its concerns over end-pit lakes, the regulator also had questions about what Suncor means by ready-to-reclaim, a crucial standard in measuring reclamation thresholds.

"The criteria proposed by Suncor may or may not adequately track the performance of a tailings deposit as expected," the decision said. "Improvements to (ready-to-reclaim) criteria will likely be required."

Time is running out for Suncor to prove its plan will work, said the regulator.

"With Suncor's Oil Sands Base Plant approaching end-of-mine life, the (regulator) is concerned with the length of time remaining to resolve Suncor's site-specific issues."

Suncor spokeswoman Sneh Seetal said the company is aware the site will require decades of monitoring.

"Absolutely, this will be a long-term monitoring program. Our goal is to develop a self-sustaining, biodiverse, boreal forest ecosystem."

In July 2016, the regulator released a directive requiring all producers to outline how they will deal with the extensive toxic ponds that altogether cover more than 220 square kilometres and contain almost 1.2 trillion litres of contaminated water.

Suncor's initial response was rejected. The regulator agreed to reconsider it after the company said it hadn't been able to describe some of the technology it planned to use because it had yet to be fully patented.

As well, regulator spokesman Jordan Fitzgerald said a meeting in July with Suncor and groups concerned about the ponds clarified issues.

"It gave us an opportunity to understand some more information in terms of what Suncor was proposing and some of the concerns that the parties had raised," he said.