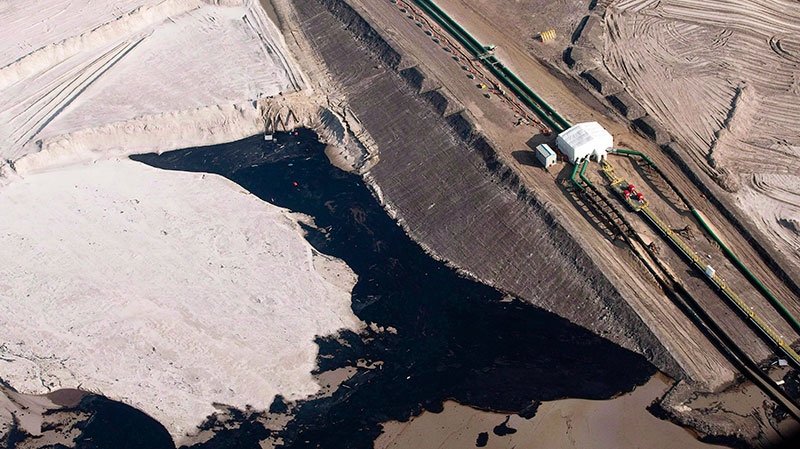 An oil sands facility is seen from a helicopter near Fort McMurray, Alta., Tuesday, July 10, 2012. (Jeff McIntosh / THE CANADIAN PRESS)

CALGARY -- Alberta's auditor general says a report from the Alberta and federal governments on their much-vaunted joint oilsands monitoring program took too long to release and was flawed.

Merwan Saher examined the first report from the Joint Canada-Alberta Plan for Oilsands Monitoring and said he found many elements lacking.

"The report lacked clarity and key information and contained inaccuracies," he told reporters Tuesday. He said it was "disturbing" that the report covering the year ended March 31, 2013 was not released until June of this year, nine months after the targeted release date.

"The lack of timeliness made the report less relevant," Saher said in the audit.

Important events took place in the 15 months between the year's end and the report's release, including the establishment of the Alberta Environmental Monitoring, Evaluation and Reporting Agency (AEMERA) and the withdrawal of key First Nations groups from the plan.

"Despite the significance of these events to the joint plan implementation and to Albertans, the report did not mention them because it only covered the period that ended on March 31, 2013. "

In early 2012, Alberta and Ottawa announced a three-year plan to work together to track the oilsands' effects on air, water and biodiversity in northern Alberta. It has been described as a "world-class" system by politicians looking to blunt some of the attacks on the controversial industry, which have contributed to lengthy delays in getting new pipelines built.

Oilsands operators are to provide up to $50 million to fund the program annually. During the program's first two years, the companies paid for the monitoring directly, but the government now has more control over that work.

Saher said the first report contains inaccuracies and makes it hard to discern what tasks have been completed and whether the program is on track. He also flags weak project management on the part of the Department of Environment and Sustainable Resource Development, and poor communication between the two levels of government.

"We conclude that Environment Canada has implemented most of the projects we examined according to their 2013-14 timelines and budgets. The department has also established quality assurance and quality control procedures and standard operating protocols for each examined project," Gelfand said in her first report as Canada's commissioner of the environment and sustainable development.

However, she said more should be done to consult First Nations and to incorporate traditional ecological knowledge into Environment Canada's monitoring activities. And she warned more clarity is needed on what the department's role in oilsands monitoring will be after March 2015.

Saher did note some improvements since the program's first year, but those were not examined in the latest audit.

AEMERA, the arms-length agency established in April that is now in charge of Alberta's role in the joint plan, said the auditor general has asked for a formal plan outlining how it intends to address his findings by Oct. 30.

A number of steps have already been taken, it said. For example, its next annual report will be released in two phases to avoid unnecessary delays. A report on how the plan's implementation is coming along will be released later this week, and a separate one on the more scientific elements is expected to be released in February.

"We think the auditor general's recommendations are valid and we're confident that AEMERA's going to address them appropriately," said Jason Maloney, a spokesman for Alberta Environment and Sustainable Resource Development.

Alberta NDP environment critic Rachel Notley said she's not holding her breath that oilsands oversight is going to improve under the governing Progressive Conservatives, especially with industry funding monitoring through a "fox-guarding-the-henhouse kind of model."

"I think that the so-called world-class monitoring plan was always more about the press release than the delivery and the auditor general's review demonstrates that more clearly than almost anything else could."