1st commercial flight in years takes off from Yemen's Sanaa 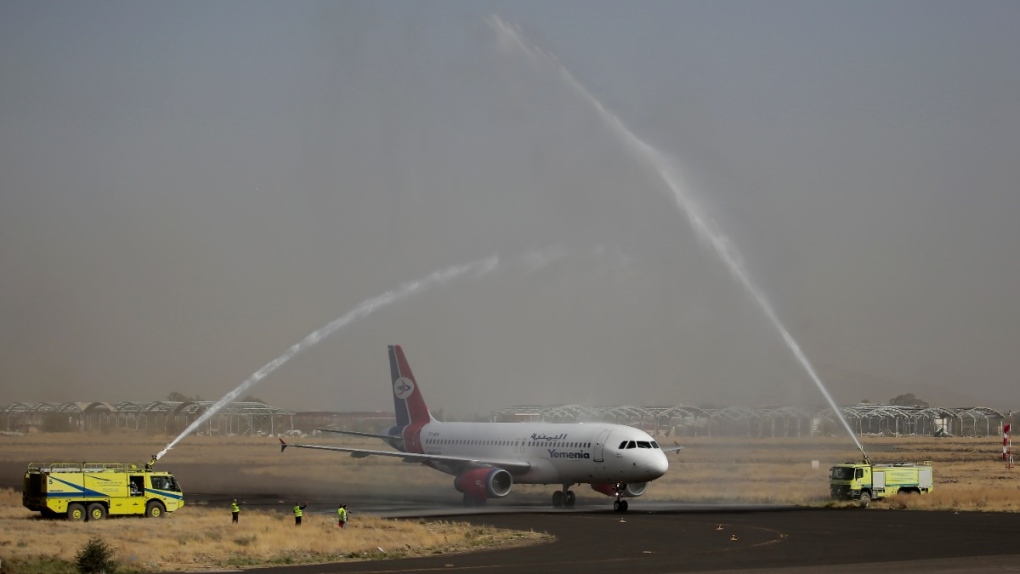 A Yemen Airways plane is greeted with a water spray salute at the international airport in Sanaa, Yemen, on May, 16, 2022. (Hani Mohammed / AP)
SANAA, Yemen -

The first commercial flight in six years took off from Yemen's rebel-held capital on Monday, officials said, part of a fragile truce in the county's grinding civil war.

The flight by national carrier Yemenia -- also known as Yemen Airways -- was bound for Jordan's capital of Amman. It had 151 passengers on board, including many patients seeking treatment abroad, according to the Houthi media office.

Earlier, the plane had arrived in Sanaa from the southern port city of Aden to pick up the passengers. On touchdown, it was welcomed by a ceremonial "water salute," according to a video posted online by the national carrier. The Houthi media office said a return flight, with 60 passengers on board, was expected back in Sanaa from Amman later Monday.

For Wednesday, Yemen Airways announced another flight from Sanaa to Amman and a return one to the Yemeni capital.

The flight is part of the UN-brokered, 60-day truce agreement that the internationally recognized government and the Iran-backed Houthi rebels struck last month. The truce, which went into effect on April 2, is the first nationwide ceasefire in Yemen in six years.

The truce accord calls for two commercial flights a week to and from Sanaa to Jordan and Egypt. The Houthi-held Sanaa is blockaded by the Saudi-led coalition, which backs the internationally recognized government.

The closure of the airport has inflicted major economic and humanitarian damage -- thousands of people lost their jobs as businesses providing services closed down or suffered heavy losses.

Before the blockade, the Sanaa airport had an estimated 6,000 passengers a day and more than 2 million passengers every year, according to the Norwegian Refugee Council, an international charity working in Yemen.

The UN envoy for Yemen, Hans Grundberg, hailed what he described as "constructive co-operation" of the Yemeni government.

"This should be a moment of coming together to do more, to start repairing what the war has broken," he said in a statement. He urged both parties to implement all truce commitments and "move towards resuming a political process to sustainably end the conflict."

The flight was initially due to take off on April 2 but a dispute over passports issued by the Houthis had delayed the departure date. This time, the internationally recognized government allowed passengers with Houthi-issued documents to board the flight.

The government-run SABA news agency said last week that new Yemeni passports would be issued in Jordan for those arriving with Houthi-issued travel documents.

The White House welcomed the flights as evidence of the ceasefire's "ongoing benefits for the Yemeni people."

"Yemen today is witnessing its calmest period since the war began, and these flights are an important step in further improving the lives and opportunities for the Yemeni people," said Adrienne Watson, the National Security Council spokesperson.

Erin Hutchinson, Yemen director at the Norwegian Refugee Council, said the take-off of the first flight was a "stepping stone towards a lasting peace for Yemen."

"The long overdue reopening of the airport was one of the major objectives of the truce," she said, urging warring parties to work towards implementing other elements of the deal, including reopening of roads around Taiz and other provinces.

Taiz, which remains partially held by the forces fighting on behalf of the government, has been blockaded by the Houthis since 2016.

The UN envoy met last month with the government delegation to prepare for meetings on reopening roads in Taiz and other provinces. The Houthis have yet to name their delegation to the road-reopening meeting, raising concerns about their commitment to lifting the blockade.

A Houthi spokesman did not respond to repeated requests for comment.

Yemen's embassy in the U.S. said the government has met "all its obligations" under the UN-brokered truce. In a tweet, it urged the international community to pressure the Houthis to "honor theirs and end the suffering of people in (hashtag) Taiz."

The truce also included allowing 18 vessels carrying fuel into the Red Sea port of Hodeida, which is controlled by the Houthis, over a two-month period.

The ceasefire came amid concerted international and regional efforts to find a settlement to the conflict that has devastated the Arab world's poorest country and pushed it to the brink of famine.

Yemen's civil war erupted in 2014, when the Houthis seized the capital, Sanaa, and forced the government into exile. The Saudi-led coalition entered the war in early 2015 to try restore the government to power.

Despite daily violations reported by both sides, major ground and air clashes have subsided and the rebels have stopped their cross-border attacks on Saudi Arabia and the United Arab Emirates, another pillar of the anti-Houthi coalition.