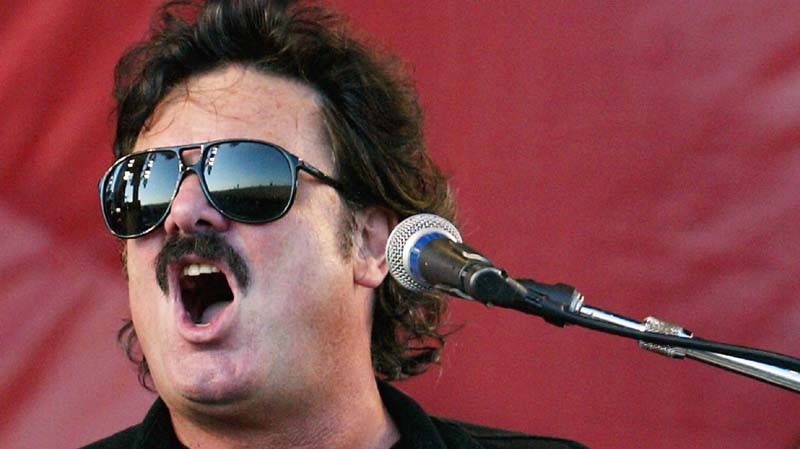 Burton Cummings of the legendary rock band The Guess Who performs at the Concert for SARS relief at Downsview Park in Toronto Wednesday July 30, 2003. The Guess Who's 1970 smash 'American Woman' is the greatest Canadian single of all time, according to a new book coming out Thursday. (Kevin Frayer / THE CANADIAN PRESS)

TORONTO - Comic superstar Russell Peters showed up at Canada's Walk of Fame hoisting one of his greatest recent achievements -- baby Crystianna, whom he clutched against his chest as he walked the red carpet to greet fans and media on Saturday.

The proud papa said it was the first red carpet gala for his 10-month-old daughter, "unless she's been sneaking out at night and crawling on red carpets," he quipped.

"It's very surreal because when I said I wanted to be successful I just meant, 'Make a living,' I didn't really think, 'Get a star,' I didn't think, 'Have people know my name,' "Peters said later as he took the mic at an outdoor stage to acknowledge hundreds of fans who lined a red carpet on a frigid afternoon.

"To have people want to step on my (name) on the street is pretty cool. I can't wait for when it's really in the ground and somebody gets hammered and pukes on my name. Somebody better twitpic that to me as soon as that happens because that's when I know I really came up."

Before heading into a downtown theatre for a formal induction ceremony, a smiling Cummings said he was especially proud to be honoured for a second time. He noted that he was recognized along with his band the Guess Who in 2001.

"The Walk of Fame is a huge deal -- you consider the names that are down there, people like Donald Sutherland, legendary movie people, Ivan Reitman and (Dan) Aykroyd," said the Winnipeg-born hit-maker.

"I don't want my hat size to swell up too much about all of this but I've been getting so much praise, it's really great. I'm glad my mother is still alive to see about all of this too, this is wonderful. This is a big day for me."

Cummings said he was was a big fan of Oh in particular, and referred to her 2004 comedy "Sideways" as "one of the greatest movies ever."

Oh said she was thrilled to meet Burton and Bondar and expressed credulity that her signature will be on a Toronto sidewalk.

"It's just quite hilarious and odd and I never thought that this would happen," said Oh, now best known for her co-starring role on the TV medical drama "Grey's Anatomy."

Richler's widow Florence attended on Richler's behalf, and was escorted by their journalist son, Noah Richler. She said her husband would have been "amused" by the fanfare, adding that she herself felt the honour was "overdue."

Movie star Ryan Reynolds was initially slated to be honoured, too, but organizers said he was unable to attend and would be inducted at a later date.

Many of the adoring fans turned out to see Toronto rapper Drake, who was to be presented with the Allan Slaight Award recognizing achievements by a young Canadian. But organizers said the rap superstar was running late and had to skip the red carpet.

Surrounded by glitz and glamour, Nestor called the experience "overwhelming."

"I'm not used to the red carpet," the towering tennis pro admitted as he walked down Yonge Street, which was shut down and swathed in red for the afternoon.

"If I win a tournament, I get a trophy say a couple words and go away. This has been a couple days of a lot of attention, so I'm not really used to it that much."

Bondar said she was inspired to excel by her family and high school teachers.

"It's good for Canada to be able to see there are other things besides sheer entertainment and comedy -- that we can do other things and still be recognized," said Bondar, who was the first Canadian woman and the second Canadian astronaut to go into space in 1992.

Comic Howie Mandel hosted the induction ceremony and gala, which will be broadcast Oct. 23 on Global and Slice.