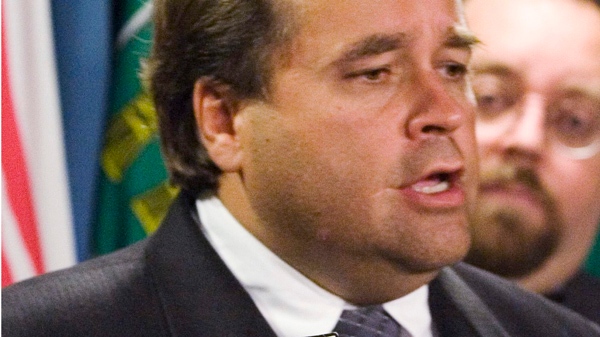 Dr. Charles McVety, senior director of the Defend Marriage Coalition, holds up a book titled the Little Black Book that he says could be used in schools to teach about homosexuality, at a news conference in Ottawa, Tuesday, Oct. 24, 2006.(THE CANADIAN PRESS / Fred Chartrand)

Christian broadcaster CTS has taken the television show of evangelical minister Charles McVety off the air, after an industry watchdog ruled that statements he had made about homosexuals violated its broadcasting codes.

The Canadian Broadcast Standards Council (CBSC) said that it had received complaints about how McVety's program, Word TV, had portrayed issues "such as homosexuality, Islam, Haiti and euthanasia," it said in a decision issued Wednesday.

The complaints charged that the program "had included discriminatory comments on the basis of sexual orientation, religion and mental disability," the organization said.

In response, CTS decided to suspend the show, saying that such concerns "are treated seriously."

The broadcaster "respects the Council's decision and has taken the required steps to make sure our programs are in compliance," CTS said in a statement on Thursday.

An influential Canadian evangelical, McVety models himself on the televangical stars south of the border, and has been known to express controversial views.

"They call me evil for expressing an opinion," he told CTV News, adding that he has been called every name in the book.

The broadcasting council cited a number of statements by the reverend. In one instance, McVety argued that "it is now a crime to speak against homosexuality," and referred to Toronto's Gay Pride Parade as advertising the city "as a sex tourism destination… with full opportunity for sex with hot boys."

That's a point that Ron Cohen, national chair of the broadcast watchdog, took issue with.

"There are statements that go to far," Cohen said. "To suggest that document is teaching kids to practice homosexuality? Absurd. Obviously absurd."

McVety has fired back at the ruling against his TV show, singling out the head of broadcasting council.

A statement on the show's website referred to the broadcasting body as "thought police" that launched "a vicious attack against Word TV," it said.