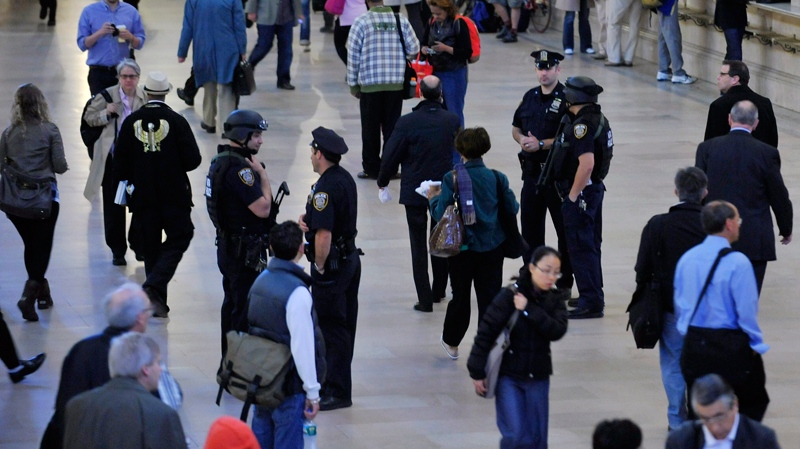 Armed Metropolitan Transportation Authority police officers and city police officer stand among the travellers in New York's Grand Central Station on Monday, May 2, 2011. Security was heightened as a result of the announcement of the killing of Osama bin Laden. (AP / Stephen Chernin)

The federal government is warning Canadians abroad to avoid public gatherings or protests that may turn violent in the wake of Osama bin Laden's death at the hands of U.S. forces.

The Department of Foreign Affairs issued its warning a day after U.S. President Barack Obama announced that bin Laden, the leader of al Qaeda and architect of the terrorist attacks of Sept. 11, 2001, had been killed during a military operation in Pakistan.

"Canadians residing in or travelling to areas where anti-Western violence could occur are advised to exercise a high degree of caution, monitor local news, avoid public gatherings and demonstrations, and stay away from areas where they may take place, as they could turn violent without warning," the department said.

The agency advised Canadians to consult its website for updated travel reports and warnings, and to register with the Canadians Abroad service in order to more easily access consular advice and assistance.

In the early hours of Monday morning, not long after Obama's announcement, Prime Minister Stephen Harper said receiving the news of bin Laden's death gave him a sense of "sober satisfaction" but warned that the al Qaeda leader's death did not necessarily spell the end of international terrorism.

Harper, who hopes to win a third straight term in Monday's federal election as leader of the Conservative party, said bin Laden's death should provide some comfort to the friends and families of the 24 Canadians who were killed on 9/11.

However, Harper cautioned that "sadly, others will take his place" and suggested the fight against international terrorism will not end with the death of one man.

Later Tuesday, the RCMP said it is assessing the news of bin Laden's death to determine if there is reason to believe there is an increased threat to Canadians.

Bin Laden was killed in a U.S. military operation Sunday at a compound in Abbottabad, Pakistan, about 100 kilometres from Islamabad.

Obama said bin Laden's body was taken into custody by U.S. officials, and there was word later that he had been buried at sea.

New Democrat Leader Jack Layton, who is making a serious bid to become either official opposition leader, or prime minister, said in a statement that the news serves as a reminder of Canada's international responsibilities.

"Tonight, as we recall the horrific events of September 11, we re-commit ourselves to promote Canada's role in the international community as a leading contributor to the world's peace, security and prosperity," Layton said.

He added that the memories of the 9/11 attacks "will be ingrained on our collective memory forever."

Liberal Leader Michael Ignatieff, who wrote a book partially focusing on Afghanistan and has participated in high-level U.S. meetings on the region, called bin Laden a "mass murderer" on Monday and said his death was "very, very good news."

"This was a mass murderer, this man was a threat to every freedom-loving person alive, frankly," Ignatieff said.