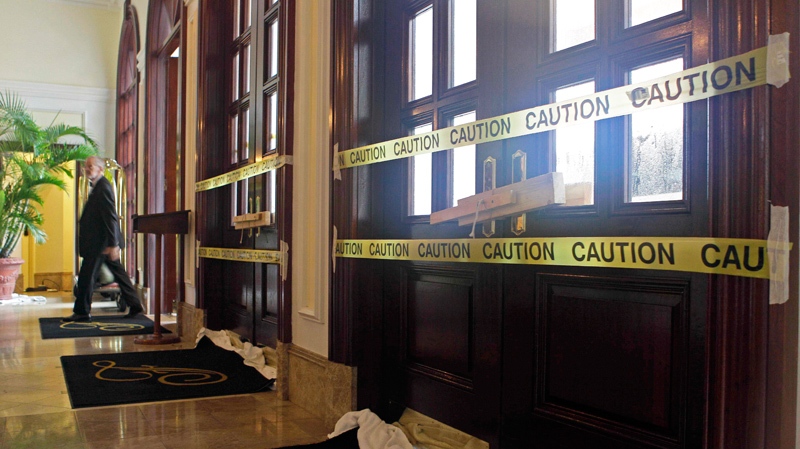 Doorways are blocked to prevent them from blowing open at the Fairmont Princess Bermuda in Hamilton as Hurricane Igor moves ashore in Bermuda, Sunday, Sept. 19, 2010. (AP / Gerry Broome)

HAMILTON, Bermuda - Tourists lined up to catch the last flights off Bermuda and locals stocked up on emergency supplies Saturday preparing for approaching Hurricane Igor, while Mexicans mourned at least seven killed by Hurricane Karl.

An extremely dangerous Category 4 hurricane earlier in the week, Igor was still a Category 2 storm, and officials warned that its pounding rains and driving winds could be deadly.

"This storm will be a long and punishing one," Public Safety Minister David Burch said. "The potential for injury and physical damage is great."

High surf kicked up by the storm has already swept two people out to sea in Puerto Rico and the U.S. Virgin Islands, far to the south.

Several people stared mesmerized at the 4- to 5-metre, including Peter Mills, 44, who took his wife and two children to John Smith's Bay Park to watch.

"It's absolutely spectacular, but it's probably going to be absolutely horrifying come the next couple of days," Mills said.

In Mexico, meanwhile, the remnants of Hurricane Karl soaked south-central portions of the country as authorities sent helicopters to rescue dozens of people stranded by flooding and hunt for others feared washed away.

At least seven fatalities were reported. A 61-year-old woman and a 2-year-old girl died when a landslide buried a house in the town of Nexticapan in Puebla state. In Veracruz state, a woman and two young children were swept away by a rushing river in Cotaxtla and two women were found dead in Felipe Carrillo.

Tropical-storm-force winds were forecast to start battering Bermuda Saturday night, with the hurricane expected to pass directly overhead or nearby late Sunday or early Monday, according to the U.S. National Hurricane Center in Miami.

Around midday, Igor had maximum sustained winds of 160 kph and was located about 520 kilometres south of Bermuda. Hurricane-force winds extended about 150 kilometres from the storm's center, and it was headed north-northwest and expected to curve toward the British Atlantic territory.

Tropical storm conditions were expected in Bermuda beginning Saturday night, and forecasters said Igor could bring 15 to 23 centimetres of rain and cause significant coastal flooding.

Hotel cancellations were reported across Bermuda, popular with tourists for its pink sand beaches and with businesspeople as an offshore financial haven.

Sophie Dier, a spokeswoman for Elbow Beach hotel, said it was almost fully booked for the weekend until a business group and a wedding party canceled. Now the hotel will be around 10 percent full, she said.

"We have been proactively advising our guests to reschedule their travel plans," said Shelley Meszoly, Fairmont's regional marketing director.

Bermudians were planning ahead and buying up supplies, said Mark Stearns, vice president of Masters Ltd., a home and garden store in the capital of Hamilton.

"We've sold out of generators, tarpaulins, buckets, rope, screws, bottled water, coolers, even trash cans and plastic sheeting," he said. "Anything people can use to secure their homes."

Schools will close Monday and Tuesday, and a local newspaper said it will not print a Monday edition.

"This decision has not been taken lightly," editor Bill Zuill wrote in an article published Saturday. "It will be the first time in living memory that The Royal Gazette has missed an edition."

The government planned to close the L. F. Wade International Airport by Saturday afternoon and likely reopen it Monday. A causeway from the east end of the island to the rest of Bermuda was also to be closed.

The last plane to leave was a British Airways flight bound for London, which departed three hours earlier than usual.

Aboard was Jane Royden, 47, and her husband, both from Birmingham, England.

"We are quite relieved to be leaving and concerned for the safety of the island and everyone here," said Royden, who cut her two-week vacation short by a week.

Traveller's Boat Works marina was running out of space for all the vessels whose owners wanted them out of the water, and arranged to turn a nearby church parking lot into a makeshift boat yard.

"They pushed the panic button basically between Thursday night and yesterday," said marina operator Kristy Roberts. "I had maybe 20 boats to mess with, now I'm up to possibly 40 ... and I think it's going to go well over that."

Bistro at The Beach, a popular bar and restaurant in Hamilton, reported a busy Friday night ahead of the storm.

"I guess people are making the most of getting out and partying," manager Duncan Adams said. "They're going to be cooped up in their homes from today."

In 2003, Hurricane Fabian killed four people when it hit Bermuda as a Category 3 hurricane.

In Mexico, Karl was dissipating over the mountains Saturday, though it could still produce as much as 7.5 centimetres of rain in some areas, the Hurricane Center said.

Karl had sustained winds of 185 kph when it hit land at midday Friday about 15 kilometres northwest of the port city of Veracruz, but the storm rapidly lost force over rugged territory that includes Mexico's highest volcano, 5,675-metre Pico de Orizaba. The storm's winds were down to 35 kph by Saturday morning.

South of the city in Cotaxtla, a town of about 5,000 residents, a river jumped its banks and flooded homes up to their rooftops.

Mechanic Oscar Rojas Hernandez said he realized in the middle of the night that the water was rising fast next to his family's home and went to get help. By the time he returned, the raging current kept him from reaching the house and he watched helplessly from 20 yards away as it went under completely in a matter of minutes.

Crews later found the body of Hernandez's son and two other villagers; his wife and mother were among five people still unaccounted for.

"We did not think the river would rise so fast," Hernandez told The Associated Press, sobbing. "I lost my family."

Homes, restaurants and shops along Cotaxtla's main street were choked with mud, water and tree branches.

"There are no words for this," Mayor Cirilo Pena said. "It's something we didn't expect. It's the first time this river has risen so far."

Veracruz state Gov. Fidel Herrera said some 16,000 people were forced to evacuate their homes as the storm roared through, downing trees, power lines and billboards and erasing beachfront huts.

Local forecasters said the storm dumped 20 centimetres of rain in the city just in the first 90 minutes after arriving. Flights into Veracruz were canceled, and public transit was shut down on Friday, though air and bus service began to resume on Saturday.

Tropical Storm Julia, far out in the Atlantic, was weakening and not expected to threaten land.