Balsillie, Lazaridis could step down as co-CEOs: report 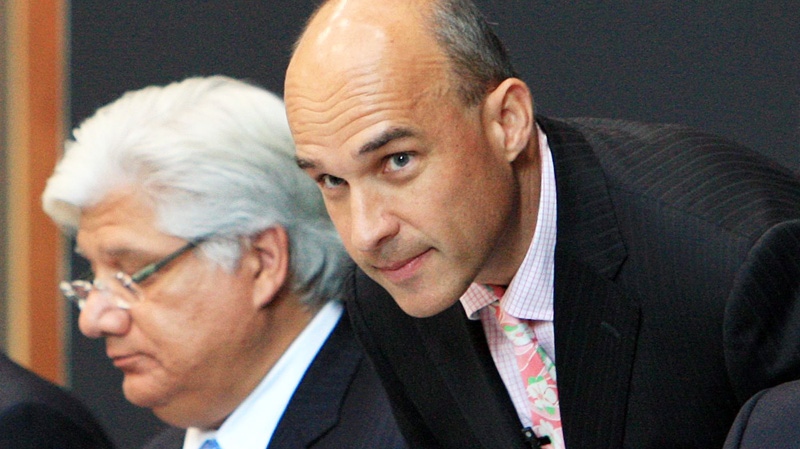 Research in Motion shares went up almost seven per cent Tuesday amid reports that the co-founders of the beleaguered BlackBerry maker may step down as chairmen of the RIM board.

The Financial Post, citing sources familiar with the situation, reported Tuesday that Barbara Stymiest may replace Mike Lazaridis and Jim Balsillie as chair of the board.

The company hasn't commented directly on the report, only saying that a committee of independent directors is due to release its report on RIM's governance structure at the end of the month.

RIM, which been losing market share to other smartphone and tablet makers, slashed the price of its poor-selling PlayBook tablets to $299 Tuesday, extending the sale until Feb. 4.

The PlayBook was released last spring as an answer to Apple's popular iPad, but failed to impress consumers and analysts.

Last year was a disastrous one for Waterloo, Ont.-based RIM. Once the most valuable technology company in Canada, it's been plagued by plummeting shares, a major, worldwide service outage and fierce competition from Apple and Android operating system. The company was also forced to cut 2,000 jobs.

Angry investors have been calling on Lazaridis and Balsillie to step down, demanding a rehaul of the company.

Adding to RIM's woes was a delay in the launch of a new generation of BlackBerrys. Their release, originally scheduled in the first quarter of 2012, was pushed back to the latter part of the year because an advanced chipset for the new BlackBerry 10 is not yet available.