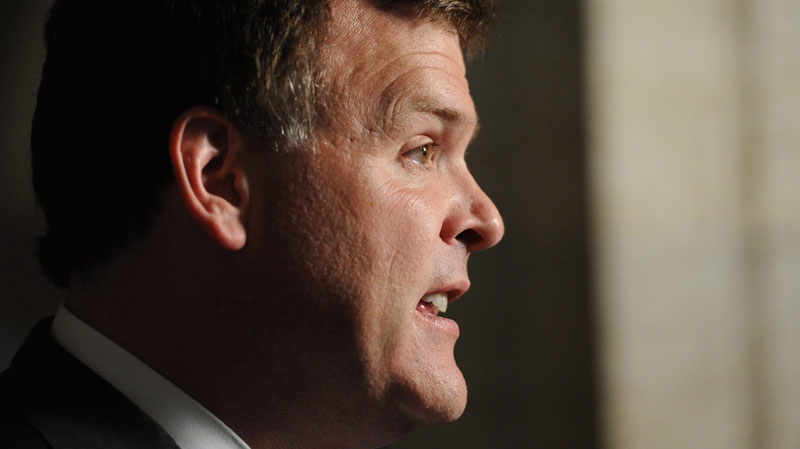 Minister of Foreign Affairs John Baird speaks to reporters in the Foyer of the House of Commons on Parliament Hill in Ottawa on Tuesday, July 5, 2011. (Sean Kilpatrick / THE CANADIAN PRESS)

The comments Monday seem to signal that the newly elected majority government will take a tougher approach with foreign policy.

Baird said that a future vote over Palestinian statehood at the main UN body won't serve any purpose except to create a public relations event. And he added that a Security Council vote would be needed.

"We think it's distinctly unhelpful to seek a public-relations declaration within the UN General Assembly. Obviously, it would be without any meaning," Baird said Monday.

"We believe that statehood should be the product of a negotiated permanent peace with security for both the Palestinian and Israeli people."

Baird's comments on both the Palestinian question and the UN disarmament conference are consistent with the Conservative government's international positions.

"There has been certainly a change under the leadership of Prime Minister Stephen Harper, and I certainly wouldn't see us changing on that regard."

Baird also told reporters in a conference call that it is "absurd and ridiculous" that North Korea is leading the Conference on Disarmament.

The United Nations Conference on Disarmament has 65 members, including both Canada and North Korea. Each of the member states rotate through the presidency.

Baird said Canada will resume its participation in the conference when North Korea's term ends on Aug. 19.

In a separate statement issued Monday afternoon, Baird said the North Korean regime "is a major proliferator of nuclear weapons and its non-compliance with its disarmament obligations goes against the fundamental principles of this committee. This undermines the integrity of both the disarmament framework and the UN. Canada will not be party to that."