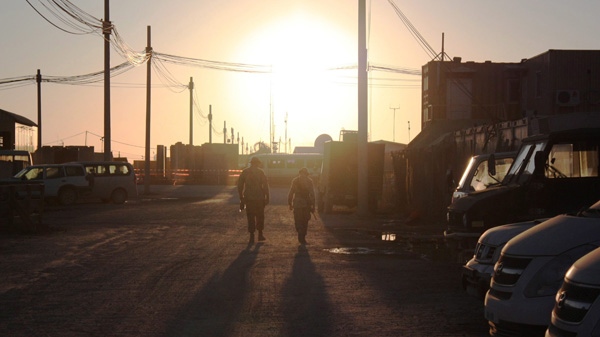 KANDAHAR, Afghanistan - Canadian soldiers and officers at Kandahar Airfield who prefer Pinot Noir to pilsner can now raise a glass with their beer-drinking buddies without having to pay for the privilege.

Each month, Canadian Forces personnel in Afghanistan are allowed two drinks. The beer comes at no cost, thanks to donations from breweries, but a half-bottle of vino costs $9.

That inequity has long left Lt.-Col. Doug Johnson with a bad taste in his mouth.

"It didn't seem fair to me that if you wanted to drink wine you had to pay for it, and if you had beer it was free," said Johnson, a resident of Niagara-on-the-Lake, Ont. -- one of Canada's best-known and most prolific wine-producing regions.

Upon arriving in theatre in November, Johnson discovered something worse: the wine wasn't Canadian. So he began reaching out to wineries in and around his hometown in hopes of securing some donations for fellow troops who might opt for grape over grain.

"Of course, coming from that region I just thought it was a tremendous marketing opportunity for the wineries down there to take advantage of and ... show their support for the troops," Johnson said.

Eventually, Diamond Estates Wines & Spirits Ltd., the Niagara-on-the-Lake winery that produces Dan Aykroyd Wines, answered the call, shipping hundreds of bottles of 2007 Pinot Noir and Riesling to the base.

"I was onboard the moment Diamond Estates mentioned their support of our troops with Dan Aykroyd Wines," the Canadian film and TV star whose name graces the bottles said in a statement earlier this week.

"This is a very proud moment for me as a Canadian and I hope these wines can inspire some light-hearted times during this difficult mission for our Armed Forces."

The bottles began shipping earlier this month and are currently stored inside a chilled storage container at Kandahar Airfield. Lest anyone there get any ideas, it's secure.

Canadians in Afghanistan consume about 82 bottles of wine per month, Johnson said. Diamond Estates is donating about 110 bottles per month, but Johnson isn't naive enough to think there will be any left over.

Troops are allowed to consume alcohol under theatre standing orders, which can vary by theatre and commander.

The specific drinking rules under such orders depend on operational needs, the potential threat troops face and whether alcohol consumption is offensive to the local population.

While personnel at the sprawling airfield can enjoy the two-drink maximum, the rules that govern the more remote forward operating bases are set at the discretion of their respective commanding officers, who have the authority to tighten drinking rules, but not loosen them.

The consumption of intoxicants is banned under the Afghan constitution but some restaurants and stores overlook that, particularly for foreigners.

On a recent evening at the airfield, Capt. Michel Larocque was one of very few holding a glass of red as he looked at a small crowd of beer drinkers.

The 43-year-old Ottawa resident figures that will change.

"Because we had to pay, maybe most people would go with what was given," he said.

"But I think now that Dan has been so generous, it will probably influence the number of wine drinkers."

The wine donation will last for the duration of Canada's military mission in Afghanistan, scheduled to conclude in July 2011.