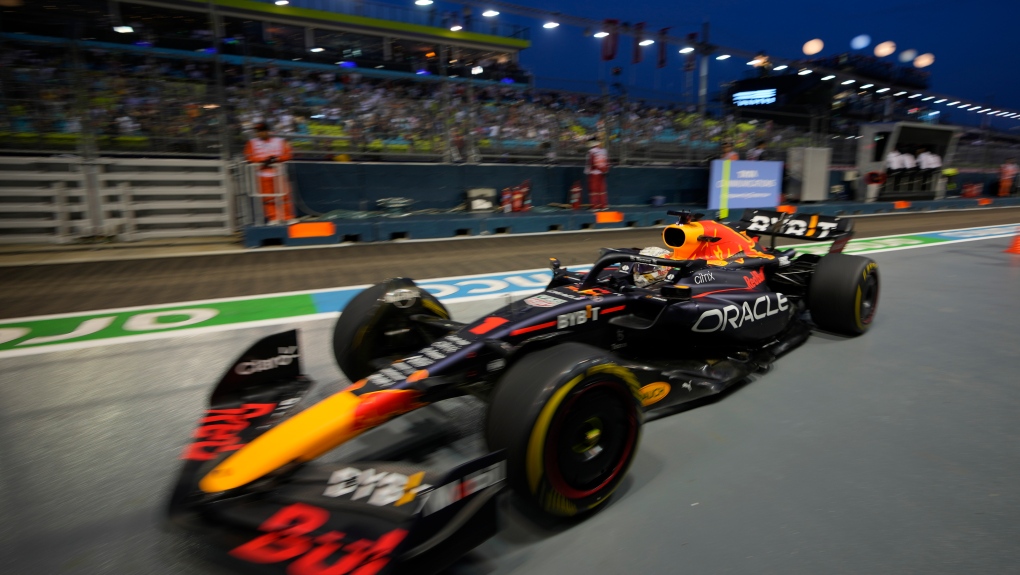 While last year's intense Formula One title battle went to the wire and captivated the world of sport, this year's championship has long looked like a procession for Max Verstappen.

It could be all over by Sunday if the Red Bull driver wins the Singapore Grand Prix and Ferrari's Charles Leclerc crumbles.

Verstappen leads Leclerc by 116 points and will clinch the title if he scores 22 points more than Leclerc, his most-realistic head-to-head challenger.

“It's quite a long shot,” Verstappen said. “I need a lot of luck for it to happen here, so I don't really count on it.”

It is more realistic that Verstappen secures the title at the Japanese GP on Oct. 9.

“I think Suzuka will be my first proper opportunity to win the title,” the Dutchman said. “So I'm looking forward to Singapore right now, but I'm also very excited for next week.”

Still, there'll be no tension in the air at the Marina Bay Street Circuit on Sunday night, like in Abu Dhabi last year when Mercedes star Lewis Hamilton lost the title on the last lap to Verstappen. Hamilton missed out on a record F1 eighth title in a controversial finish following a chaotic late restart.

That fans won't get to see any such drama this season is much to Hamilton's regret.

“I feel for the fans . . . Last year, going right down to the wire, that was intense for everybody and so it's never great when the season finishes early,” Hamilton said. “For you, as the one individual (winner) it's great, but for the actual sport (it) is not spectacular. Let's hope for the future that it's a bit better.”

Red Bull is unlikely to allow Perez an opportunity to beat Verstappen, though, and would deploy him to defend its star driver. Verstappen has won 11 of 16 races, including the past five, taking his career tally to 31.

“It's been a really special season and I'm enjoying it a lot,” he said. “But I (will) probably enjoy it more after the season, looking back at it.”

“It's even good to watch when you're when in the car,” McLaren driver Lando Norris said. “Especially when he starts (far back) and still wins quite easily.”

Hamilton hasn't gotten close enough to challenge Verstappen this year, after so long in the spotlight.

Two of Hamilton's titles were on the last day: in 2008 with an overtake on the last corner of the final race, and in 2014 when he beat then-Mercedes teammate Nico Rosberg in Abu Dhabi. Two years later he lost the title in the last race to Rosberg.

Hamilton won the championship with three races left in 2015, and when he won the 2020 title at the Turkish GP in a shortened season due to the coronavirus pandemic.

That moved him level on seven titles with fellow great Michael Schumacher, who won in 2002 with six races remaining. An outstanding campaign saw Schumacher place first or second in 16 of 17 races, and third in Malaysia - a race won by his younger brother, Ralf.

Hamilton was won a record 103 races but none this season.

Mercedes has struggled with ground effect, where the floor generates aerodynamic grip - an issue known as porpoising or bouncing - that has been particularly difficult on street circuits like Monaco or Azerbaijan.

“We hope that the car works better here. It really depends how bumpy it is, and the bumps often set the car off,” Hamilton said. “Maybe the car will be fine. Maybe it won't.”

He does think Mercedes has figured out how to maximize opportunities when they do come.

“We know where those limitations are. We just have to try and work around them,” he said. “I think we were very fortunate, we're in a much better place I think. So I hope that we're not far away (from a victory).”

Russell seems to have coped better, however, and leads sixth-place Hamilton by 35 points in the standings. He has seven podium finishes compared to six for Hamilton.

Albon jumped back into the Williams FW44 and completed the two practice sessions on Friday in hot and humid evening conditions.

Drivers lose around 5 kilos (11 pounds) in weight through dehydration during Sunday's race.

Hamilton hit form to lead the first practice from Verstappen and Leclerc.

Ferrari's Carlos Sainz Jr. topped the second practice ahead of Leclerc and Russell, with Verstappen fourth but spending less time on track.

Moments into P1, Leclerc went back to the team garage with mechanics working on his brakes for 20 minutes.

Near the end of P2, Pierre Gasly jumped out of his AlphaTauri car in the pitlane as his team quickly extinguished flames coming out the back.

There is a third practice Saturday ahead of qualifying under floodlights.