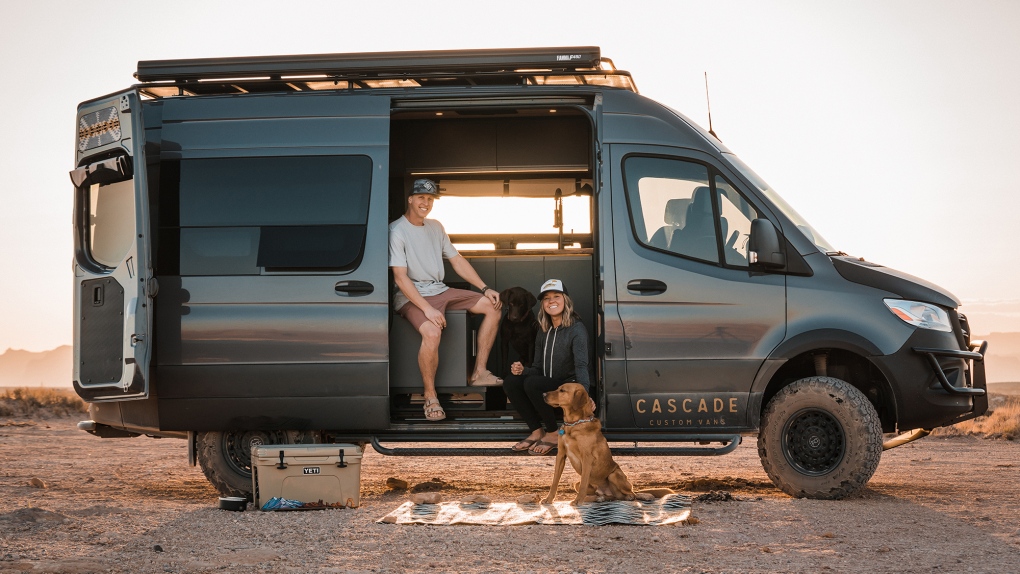 The once-tiny cottage industry of van conversion companies has found itself in the center of a distinctively pandemic-era dilemma: ravenous demand and monthslong backorders on virtually all supplies.

The #vanlife movement was already in full swing before the pandemic, fueled by envy-inducing posts on Instagram and DIY van conversion videos on YouTube. But as the pandemic took hold, more and more antsy Americans who could work remotely decided to join the vanlife community.

That's sent demand for utility vans, as well as the companies that specialize in converting them into mobile homes, through the roof.

The #vanlife hashtag now has more than 10.6 million posts on Instagram.

"People wanted to get out. They wanted to get away from other people and stay safe, and we were all limited in what we could do," Jagodnik said. "It pushed people outside and to travel away from others and take the road less traveled, and so the industry just continued to grow."

Since the start of the lockdown, Outside Vans has a growing backlog of orders and a growing waitlist. Customers can expect to wait at least eight to 12 months before the company can even start on their projects.

It's one thing to decide to hit the road. It's another to find the right wheels for the trip. The auto industry has been hit especially hard by the one-two punch of a shortage of vital computer chips that's hampered production. Some clients couldn't get a van in time to meet the date their builds were scheduled to start, said Alexa Owens, co-founder of Cascade Custom Vans in Bend, Oregon. "That was kind of nerve-wracking."

Another culprit in the struggle to secure vans: Amazon. As sales surged during pandemic lockdowns, the online retailer kept expanding its fleet to keep up with deliveries. And unfortunately, Amazon's preferred models — Mercedes Sprinters, Ford Transits or RAM ProMasters — are the most popular choices for vanlifers.

Even when customers secured a van, delays at ports combined with a labour shortage have slowed the delivery of raw materials needed for the conversions.

For Cascade Vans, one of the worst shortages has been windows, which are three months to eight months backordered, Owens said. Cascade, which is fully booked through the year, anticipates at least another year of supply shortages while vendors play catch-up.

A typical van conversion starts starts by gutting a utility van before replacing the interior with the makings of a mobile home: loft beds, mini sinks, toilets, refrigerators and built-in seating.

It's not a cheap endeavor. "With costs of goods going up, our prices have to reflect that," lamented Bryan Walker, co-owner of Cascade. "It's one of those unfortunate things but I think a lot of people are understanding of it right now."

Prices for just the conversion at Cascade can range between $50,000 to $100,000. At Outside Van, where the company purchases the vans for its customers, prices can reach up to $300,000, depending on the customizations a customer chooses. Not included in those figures: the price of gas, which is currently at a seven-year high, and any mechanical issues that come up along the way.

While growing interest in van life, and camping generally, has been great for business, it also has raised questions about the movement's sustainability and effect on the environment. The surge in demand has been "bittersweet," says Walker, who owns a van with Owens.

"Five, six, seven years ago, some of the places we'd go, you'd be up there alone. Now, there's no trespassing signs, and they've banned camping in a lot of places because it's just gotten so trashed," Walker said. "You see the places that you love and get to experience doing that lifestyle, and now you're seeing it become kind of exploited."

During the pandemic, the number of people at National Parks and campsites shot through the roof resulting in an increase of litter, graffiti and the spread of COVID-19, according to reporting from Time. Although the parks have tried to implement restrictions, tourists managed to continue visiting and ignoring restrictions.

Kim and Jesse Butler of Port Angeles, Washington moved into their Ram PROMaster, named "The Walter Mitty," right before the pandemic started. They have since traveled traveled up and down the West Coast, pandemic restrictions permitting.

The Butlers say they are "totally self contained," and don't leave sewage or trash behind.

"We always do our best to leave no trace and to make sure that we are clean with what we do," Jesse told CNN Business.