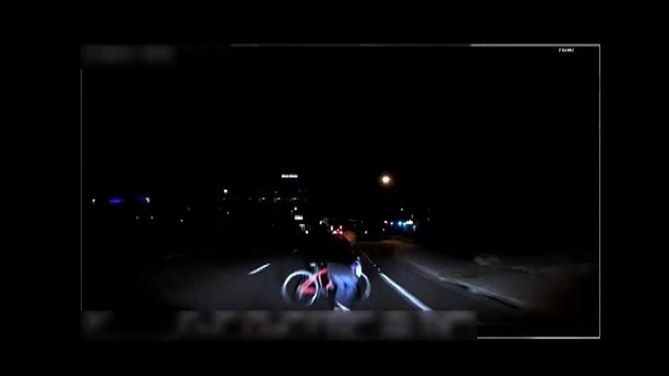 An image from dashcam footage released by the Tempe Police Department shows the moment before the collision of an Uber self-driving vehicle and a pedestrian on March 18, 2018. (AFP)

WASHINGTON, UNITED STATES -- An Uber safety driver at the wheel of an autonomous car during a 2018 accident in Arizona that killed a pedestrian has been charged with negligent homicide, prosecutors said.

The Maricopa County prosecutor's office said in a statement Tuesday that 46-year-old Rafaela Vasquez had been indicted in the death of Elaine Herzberg on March 18, 2018.

Vasquez was behind the wheel of the Uber self-driving car operating in autonomous mode when it struck and killed Herzberg, who was pushing a bicycle across an unlit section of roadway at night.

No charges were filed immediately after the incident, but a National Transportation Safety Board investigation found that Vasquez, who was able to take the controls from the autonomous car at any time, "was visually distracted throughout the trip by a personal cell phone."

"Distracted driving is an issue of great importance in our community," said Maricopa prosecutor Allister Adel.

"When a driver gets behind the wheel of a car, they have a responsibility to control and operate that vehicle safely and in a law-abiding manner."

Officials said Vasquez pleaded not guilty and was released with an ankle monitor.

The incident halted Uber's testing and raised questions about the technology used in autonomous vehicles.

Uber temporarily suspended its autonomous ridesharing program, eventually putting its self-driving cars back on the road in Pittsburgh in "manual mode," with a driver at the wheel at all times.

Uber did not immediately respond to an AFP query on the indictment.