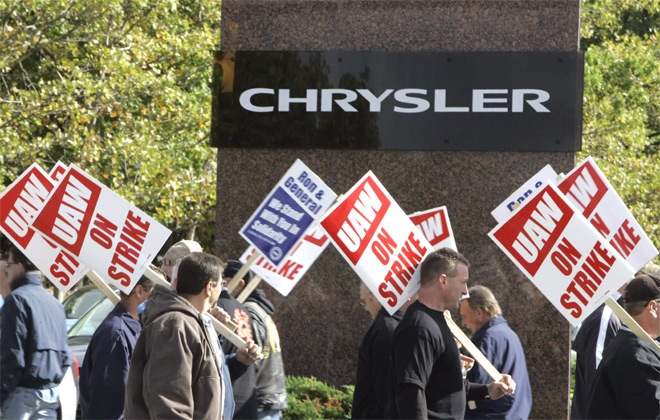 DETROIT - A Missouri-based official at the United Auto Workers was charged Thursday with corruption in an alleged scheme to embezzle union money and spend cash on premium booze, golf clubs, cigars and swanky stays in California.

It's another blow to the union's reputation and comes just before national contracts with General Motors, Ford and Fiat Chrysler expire at 11:59 p.m. Saturday. The 40-page criminal complaint against Vance Pearson is certain to raise more questions about UAW President Gary Jones, whose Detroit-area house was searched by agents on Aug. 28.

Pearson is director of UAW's Region 5 in Missouri, which covers thousands of union members in more than a dozen states, including California. Jones had the same job before he became national president in June 2018. Pearson worked under him as assistant director.

He is the 10th person charged in an investigation of the Detroit-based union's finances. Most of the corruption cases so far have centred on a Detroit training centre jointly run by the UAW and Fiat Chrysler, but the scrutiny now is much wider.

“The outlay of the funds was not properly approved ... and used for the personal benefit of the upper echelon of union officials who were elected to represent the members' best interests above their own,” Donohue said.

Pearson, of St. Charles, Missouri, is accused of embezzlement, fraud, filing false reports and conspiracy. He was arrested Thursday and appeared in federal court in St. Louis. Messages seeking comment were left with his attorney.

“While these allegations are very concerning, we strongly believe that the government has misconstrued any number of facts and emphasize that these are merely allegations, not proof of wrongdoing,” UAW spokesman Brian Rothenberg said. “Regardless, we will not let this distract us from the critical negotiations underway with GM to gain better wages and benefits.”

The UAW has picked GM as a target company, meaning it will be the focus of bargaining and could face a strike by 49,200 union members if a tentative contract isn't reached this weekend.

In a strongly worded statement, GM said it was outraged and concerned by the conduct of union officials outlined by the government.

“These serious allegations represent a stunning abuse of power and trust. There is no excuse for union officials to enrich themselves at the expense of the union membership they represent,” the statement said.

The criminal complaint against Pearson mostly focuses on UAW Region 5 conferences at resorts in Missouri and Palm Springs, California. The annual gathering in California was intended to train local leaders but Pearson and others “would spend weeks and/or months living in Palm Springs enjoying an extravagant lifestyle paid for with UAW funds,” the government alleges.

More than $600,000 in UAW money paid to Renaissance Palm Springs Hotel was used to pay debts by union officials at area businesses, including restaurants, a golf resort, cigar shop and rental properties, between 2014 and 2017, according to the government.

Investigators uncovered a receipt for a New Year's Eve 2016 meal totalling more than $6,000, including four bottles of champagne for $1,760. They said there was evidence of a “culture of alcohol” in the senior ranks.

Since 2017, nine people have pleaded guilty in an investigation that began with spending at the UAW-Fiat Chrysler training centre in Detroit. Some are co-operating and providing key details to the government, Donohue wrote.

Jones, the union president, hasn't been charged with any crimes. But the court document says golf clubs and more than $30,000 in cash were among items recently seized from the home of “UAW Official A.”

“Rank-and-file file members will start asking whether union leaders cleaned the slate or whitewashed it,” said Erik Gordon, a law and business professor at the University of Michigan. “The union has spent hundreds of thousand dollars of members' dues defending leaders who are in jail. The charges against Pearson probably are just the first fruit of the searches.”

Tom Krisher contributed to this story.