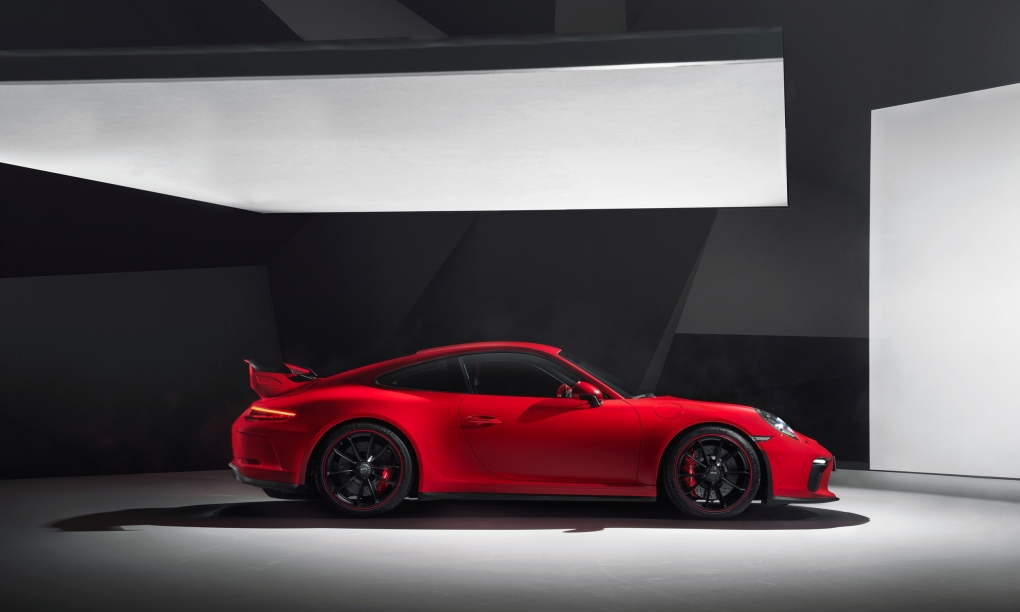 The 2018 Porsche 911 GT3, available with a manual transmission (Porsche handout)

NEW YORK — If you’re a fan of manual transmissions, Porsche has some great news for you. The new 911 GT3 unveiled at the New York International Auto Show will come not only with a seven-speed dual-clutch PDK automatic transmission, but also with three pedals for those who like to shift their own gears. The announcement from the stage brought a round of applause from enthusiastic auto writers at the press conference.

“We listened to the customer,” said Andreas Preuninger, head of Porsche GT. When many manufacturers stopped offering manuals in their sports offerings, “we were on the same route, thinking there was no demand and that it made no sense,” he said of the last GT3.

“We gained a lot of new customers, but we lost a lot of old and very loyal customers because they wanted to shift.”

The 911 GT3 also retains natural aspiration instead of being turbocharged, with a new, high-revving 9,000-rpm-redline direct-injection 4.0-litre flat-six engine that turns out 500 horsepower and 339 lb-ft of torque, and which Porsche says is virtually unchanged from the 911 GT3 Cup race car.

Preuninger said the ability to get so much power out of a small, non-turbo engine comes down to the engine’s overall efficiency and, mostly, by quickly getting rid of the engine’s heat.

The new GT3 accelerates from zero to 96 km/h in 3.2 seconds, with a top track speed of 318 km/h. It features a carbon-fibre rear wing, and a lightweight front end that’s optimized for improved airflow.

The chassis features active rear-axle steering. The rear wheels steer either in the opposite or same direction as the front wheels, depending on vehicle speed, for improved handling and stability. Two seat variations are available, including 18-way power sport seats; or full bucket seats in woven fibre-reinforced plastic. Standard equipment includes a Track Precision app that enables drivers to record, display and analyze driving data on their phones.

The GT3 goes on sale in Canada in the third quarter of 2017, starting at $163,300. Preuninger said he expects about one-third of buyers globally to opt for the six-speed manual transmission, which will be a no-charge alternative to the seven-speed dual-clutch.

Porsche also presented the North American premiere of the all-new Panamera Sport Turismo in New York. The new model is the first Panamera to offer seating for five instead of four, and has a larger tailgate and luggage compartment for more practicality.

Along with the Sport Turismo, Porsche showed the Panamera Turbo S E-Hybrid. In an unusual move, the automaker has positioned a plug-in hybrid as the most powerful model in a standard model line. The Turbo S E-Hybrid uses the 4.0-litre V8 engine from the Panamera Turbo, but mates it with an electric motor to produce a combined total output of 680 horsepower and 626 lb-ft of torque. When plugged in and charged, it also provides a range of fuel-free, all-electric driving. An Executive version will also be offered with a longer wheelbase.