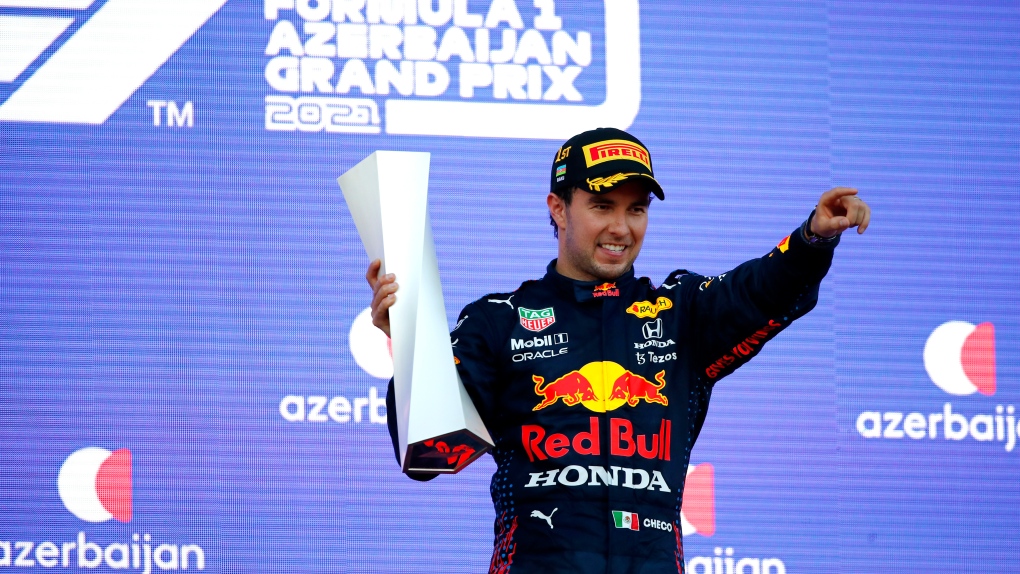 Red Bull driver Sergio Perez of Mexico holds his trophy on the podium after winning the Formula One Grand Prix at the Baku Formula One city circuit in Baku, Azerbaijan, Sunday, June 6, 2021. (Maxim Shemetov, Pool via AP)

BAKU, AZERBAIJAN -- Max Verstappen was cruising toward an easy second consecutive victory until an unexpected tire failure turned the Azerbaijan Grand Prix into a two-lap shootout and a shock victory for Sergio Perez.

The finish Sunday just might have been an unintentional preview of the changes Formula One plans to experiment with later this season in an effort to add excitement to the on-track product.

Championship leader Verstappen crashed out of the lead with four laps remaining to bring out a red flag that set up the unconventional shootout from a standing start. Lewis Hamilton went off course trying to pass Perez for the lead, marking the first time since 2016 that the top two in the championship standings failed to score point.

That made for an unfamiliar podium as Perez, Sebastian Vettel and Pierre Gasly all finished in the top three for the first time this year.

Verstappen had no warning his tire was about to fail as he slammed into the wall. The Dutchman climbed from his car, inspected the tire and kicked it in anger before stomping off in disgust over the race-changing failure.

"Sometimes you can hate this sport," Verstappen said after the race.

Red Bull was clearly concerned about the Pirelli tires after a similar accident ended Lance Stroll's race earlier and under red flag the team asked F1 that the cars be allowed to change tires before the two-lap sprint to the finish.

F1 had previously announced it would experiment with half-hour sprint races in places of qualifying later this season. Baku was an unexpected preview of an even shorter, more explosive format.

Liberty Media, an American company, is in its fifth season running F1 after buying the commercial rights in 2017. The U.S. ownership has brought a focus on a younger audience on social media and in a deal with Netflix.

"The Americans took over, so I wasn't really surprised that we go first with the entertainment," Gasly said of the two-lap shootout that decided the race. "I was quite happy. It always brings a bit more excitement. It creates some sort of adrenaline inside you and I knew there will be some opportunities because you start only for two laps.

"Everybody is a bit like lions out of the cage and everybody goes for everything and try to make as many positions as they can in a very short time. It was very intense. I really enjoyed it. If anything, hopefully in the future they'll do the same."

Perez was the leader on the restart but Hamilton shot past him in his attempt to win the race and reclaim the points lead from Verstappen. But he failed to brake in the first corner and his Mercedes slid off track. Hamilton dropped to 15th, snapping a streak of 54 consecutive races of earning a points position finish.

Hamilton said he accidentally flicked a switch which "basically switches the brakes off and I just went straight."

Four-time champion Vettel took second to give Aston Martin its first ever F1 podium in an an impressive drive after qualifying 11th. It was Vettel's highest finish since 2019. Gasly was third for AlphaTauri.

The red-flag was the second of the season following a crash between Valtteri Bottas and George Russell at Imola in April, and the longest suspension since Romain Grosjean's fiery crash in Bahrain last November caused a stoppage of more than an hour.

It was the second career win for Perez, who is in his first season with Red Bull. It somewhat salvaged the race for the team that had been headed toward a 1-2 finish before Verstappen's tire failed. Verstappen retained a four-point lead over Hamilton in the standings; Perez climbed from fifth to third.

"I am so, so happy. First of all I have to say I am very sorry for Max because he had a tremendous race," Perez said. "We were going to have a 1-2 together, but in the end it was still a fantastic day for us and luckily we were still able to finish the race."

Perez's second win ties him with Pedro Rodriguez for the most in F1 by a Mexican driver. He waited nine years from his 2011 debut to his first win and now has two in six months.

Perez called for an investigation into the tire failures, which should not happen on the straightaway at Baku.

"A failure there is something pretty extreme and luckily nothing happened today, but it's something that has to be reviewed and make sure that we understand what's going on," he said.

Charles Leclerc started on the pole for Ferrari but couldn't replicate his qualifying pace. He eventually finished fourth after losing a fight with Gasly for the last podium place. Lando Norris took fifth for McLaren, hours after the team announced longtime investor Mansour Ojjeh had died aged 68.

Carlos Sainz was eighth for Ferrari after recovering from going off the track and Daniel Ricciardo was ninth to give McLaren a double points day. Kimi Raikkonen's 10th place for Alfa Romeo was his first points finish since Nov. 1.

Hamilton's teammate Bottas was never in contention after qualifying 10th and finished 12th after being overtaken by both of the Alfa Romeo cars. Mercedes failed to score a point for the first time since 2018.