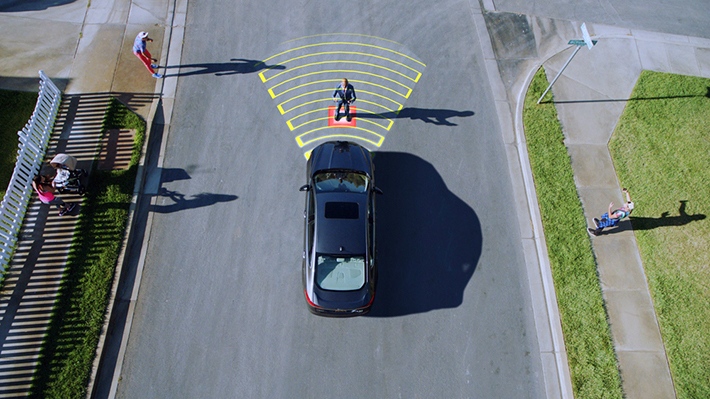 A new poll, commissioned by Ford, has shown that worries over night blindness and the fear of hitting someone top a list of night-time driving fears. For the latter at least, there is now a solution that goes beyond wearing spectacles.

The car maker is for the first time introducing new technology that is designed to detect pedestrians at night and then automatically apply the brakes if the driver does not respond to initial warnings.

This very latest Pedestrian Detection technology is to be introduced on the next-generation Ford Fiesta in Europe. This soon-to-be released supermini was on display at the Geneva Motor Show. In North America, the new technology will debut first on the 2018 Ford F-150 and the 2018 Ford Mustang.

Many drivers find driving at night a stressful experience, especially when driving in towns and cities. Pedestrians, who can be distracted by personal technology, can and do step into the road without warning, leaving even alert drivers very little time to avoid a disaster. Ford says that in daylight or at night, Pedestrian Detection is designed to help identify people already in or about to step into the road in front of the approaching car.

In Europe, the poll (which took the opinion of 5030 drivers in Germany, France, Italy, Spain and the U.K.) showed that 81 per cent of drivers overall admitted to being concerned about driving at night. More than half say poor night vision is a source of stress, and more than a third worry they might be involved in an accident or hit a pedestrian. In the U.S. during 2015, three out of four pedestrian deaths happened at night.

Pedestrian Detection processes information from a radar located in the fender coupled with a windshield mounted camera. Instantly, the technology compares from a database of pedestrian ‘shapes' which enables the system to distinguish people from objects such as trees and road signs. The camera delivers more than 30 snapshots every second, say the company, enabling the system to pick out pedestrians, even in low-light conditions, illuminated only by the headlights.

Audible and visual warnings are directed to the driver. As the last resort the vehicle's system automatically applies the brakes.

Fear of the dark, or nyctophobia, is a leftover from our cave-dwelling ancestors. Today it affects us behind the wheel.