Minivans are making a huge comeback. Here's why 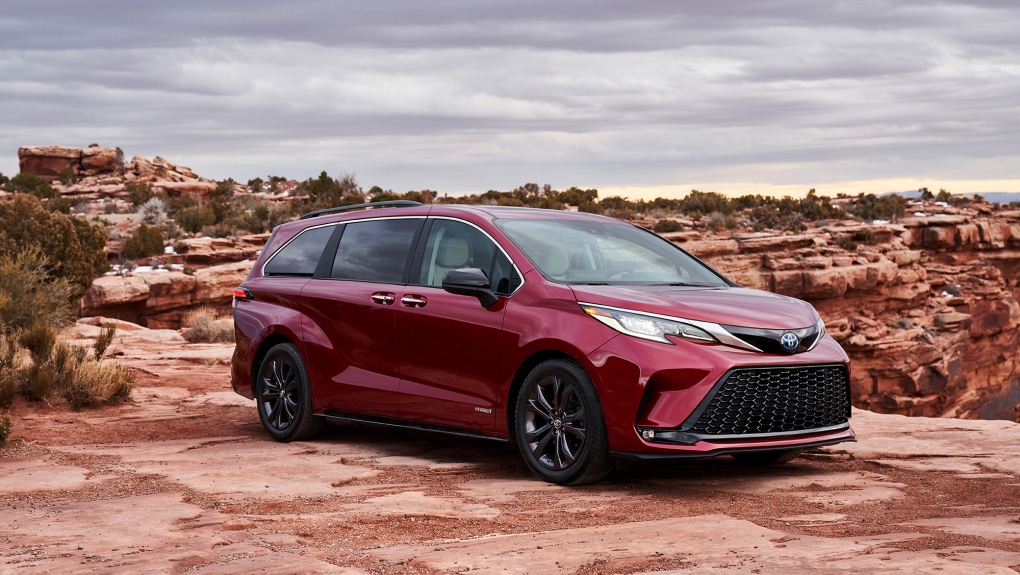 Toyota Sienna designers said they were influenced by the back end of the Toyota Supra sports car and the front of a Japanese bullet train. (Toyota Motor Corporation)

Maybe you don't think minivans are cool. It wouldn't be all that surprising. They have been seen as so uncool in the past that they nearly became extinct. But now, minivans are making a comeback -- and they are actually becoming quite popular.

In fact, there's been so much demand that minivans sold for, on average, eight per cent above sticker price last month in the U.S., according to a recent Cox Automotive report. Meanwhile, cars, trucks and SUVs sold for sticker price, which is surprising enough in its own right. Car shoppers can usually negotiate significant discounts on most vehicles but, with production of new cars hampered by computer chip shortages, that's not the case now -- especially with minivans.

People seem to be finally catching on to the minivan's essential practicality. Minivans provide even more of the useful capabilities of SUVs -- cargo and passenger space -- without the off-road capabilities that go largely unused. (Toyota and Chrysler minivans are available with all-wheel-drive but they aren't really intended for driving off-road.)

"For families, there are still few better vehicle choices than a minivan," said Matt Degen, a senior editor at Kelley Blue Book. "They're just easier."

Big sliding doors and high seats make it simple to attach baby seats. Big cargo compartments have plenty of space to hold strollers, playpens or sports gear without having to figure how to fit it all in.

There are only four car companies currently offering minivans in America. Three of them -- Toyota, Chrysler and Kia -- have recently redesigned their vans to be nicer and better looking than ever before.

Chrysler recently updated its van, the Pacifica, giving it a new front face and a nicer interior. Chrysler also introduced a less expensive minivan, the Voyager, to appeal to business customers and those who just want a basic van without luxury pretensions. Toyota introduced a completely redesigned Sienna last year with styling inspired by the Toyota Supra sports car. (Yes, really. The Supra.) Then Kia introduced the Carnival, a new name on a completely redesigned SUV-shaped minivan, to replace the Sedona. The Honda Odyssey also got some technology and design updates for the 2021 model year.

Chrysler is the U.S. market leader in minivans and, as a company, invented the modern minivan back in the 1980s. Someone at Chrysler -- now part of Stellantis -- had the idea for a small, front-wheel-drive van that could fit inside a suburban garage, according to the book "Mopar Minivans" by David Zatz.

When they came out in 1984 the Dodge Caravan and Plymouth Voyager were instant hits. The swankier Chrysler Town & Country came later. Other automakers tried to compete, initially with family-friendlier versions of rear-wheel-drive work vans then, later, with their own front-wheel-drive minivans.

That was before the SUV craze, though. Once SUVs began taking over the American auto market, most car companies dropped their minivans.

But this wholesale exit from a "dying" minivan market segment helps explain why the ones that remained are so good, said Ezra Dyer, an editor with Car and Driver and a minivan owner.

"It's the same thing with sedans where crossover SUVs have consumed the world," he said "So what's left in those segments, be it sedan or minivan, are the very best players."

Dyer owns a Chrysler Pacifica plugin hybrid minivan, the only plugin hybrid van currently on the market. He likes that it allows him to drive for an EPA-estimated 32 miles on electricity before the V6 gasoline engine even has to run.

"I can go to work and never have to buy gas," he said. "That's a huge, huge bonus of the Pacifica Hybrid."

Because it carries its large battery pack under the floor, the Pacifica Hybrid doesn't have one of Chrysler's most famous features. It lacks the so-called Stow-n-Go seats available in other versions of the Pacifica. These are back seats that fold down under the floor leaving behind a flat space for carrying large items. (The back seats on the plugin hybrid are removable, though.)

The popularity of those folding seats hints at one of the key competitive points in the minivan market, clever gadgets and features. Minivans don't usually sell based on how fast they are or on how well they handle a curve -- although, with their lower ride height, they can be nicer to drive than some SUVs.

Generally, minivans are about practicality so the built-in vacuum cleaner introduced in the Odyssey in 2013 was, for most shoppers, probably a bigger deal than its relatively nimble handling. Other minivans now also offer built-in vacuums.

Beyond the clever amenities, technology has become the new battleground among minivans. Screens for the backseat passengers offer all sorts of entertainment from streaming video to interactive games.

"I can ride in the back and play checkers against my kid over in the other seat on our screens right in front of us or play Roadtrip Bingo or Hangman, things like that," said Pacifica owner Dyer.

Seats are another big competitive point. Second row minivan seats can rival those in the Business Class section of an airplane. The Kia Carnival's so-called VIP Lounge Seats recline far back and footrests rise from underneath. The Toyota Sienna's second row seats can slide back more than two feet for more legroom. The Honda Odyssey comes with seats that can be shifted sideways apart from each other.

"If you have kids that are hitting each other you can separate them," said Jimmy Jenkins, head of product planning at Honda.

These vans are worth putting all this technology and design effort into, automakers say, because they bring in customers they might not attract otherwise. For Stellantis, the Pacifica plugin hybrid is bringing in customers who had been driving Chevrolet Bolt EVs and even Teslas, said Mary Ann Capo, head of marketing for the Pacifica.

"They tend to be younger, wealthier, just a premium buyer that we weren't attracting before," she said.

Honda claims the Odyssey buyers stay with the brand even after they trade in the minivan after their kids leave home.

"I guarantee you 100% it keeps them in the Honda brand almost for life," said Jenkins.

If minivans can attract and hold on to customers as well they can hold strollers, then they might just have a future.