Meet the Croatian inventor behind the world's first electric supercar 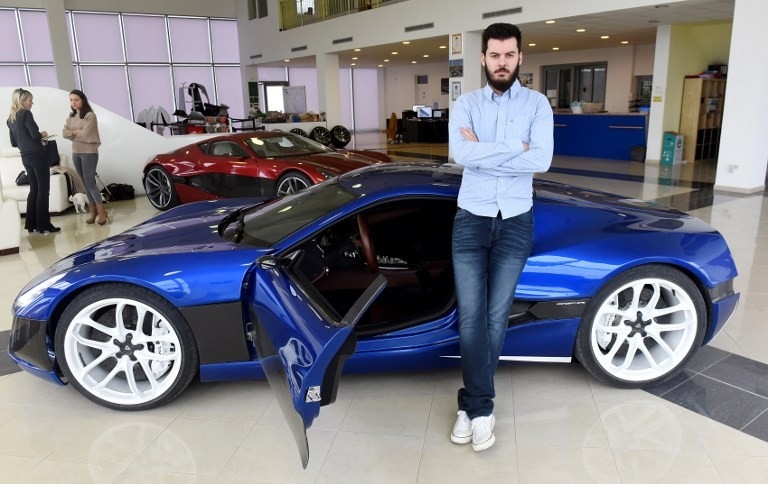 Croatian inventor Mate Rimac, 28, poses next to his 'Concept One' supercar model at his factory and showroom in Sveta Nedelja, on the outskirts of Zagreb on February 17, 2016. (Denis Lovrovic/AFP)

He's the name behind the world's first electric supercar, winning international plaudits for his ingenuity.

But for Croatia's 28-year-old Mate Rimac, it all started as a hobby in his garage.

A keen techie since high school, Rimac was racing an old BMW when he blew the engine and decided to turn the car into an electric one starting with pieces he bought on the Internet.

A decade later, his firm Rimac Automobili is becoming a global leader in electric vehicle technology, selling Concept One supercars for 850,000 euros ($923,000) each and giving a much-needed boost to Croatia's start-up scene.

"We want to be the best in the world in what we do and we are changing the world," Rimac told AFP in his factory showroom in the small town of Sveta Nedelja, near the Croatian capital.

The confident but modest entrepreneur was named by Politico Europe in December as one of 28 people across the continent who are "shaping, shaking and stirring Europe".

But mastering the complex technology of electric sports cars and winning financing was no easy task -- especially in a small country of 4.3 million people with no automotive industry.

Rimac formed the company in 2009 when he realised there was not much left of the original vehicle he had transformed in his garage, and the aim was to build an electric supercar from scratch.

"First we had to create a team, then the know-how by trial-and-error method to eventually become a company that could make a product," he said.

The company unveiled the Concept One at the 2011 Frankfurt Motor Show, where nobody expected a small Croatian firm to showcase an electric car that could reach 100 kilometres (62 miles) per hour in a staggering 2.8 seconds.

Last week at the Geneva International Motor Show, Rimac introduced the production version of the car along with a prototype of its "evil twin", the even more powerful Concept S.

"We can't really decide which Rimac creation we'd rather have, so we're off to get lottery tickets with hopes of buying both," said a review on motoring news site Autoblog.

Many expected Rimac's success would lead him to move somewhere else, such as Silicon Valley, Germany or Italy. But instead he has kept the business in Croatia, a country slowly emerging from six years of recession.

He plans to build another factory in Sveta Nedelja, while his employee numbers are set to double this year to 300. Their average age is 30, and many are young engineers straight out of university.

They build most of the supercar parts from scratch on-site -- from the body and chassis to the power distribution unit and batteries -- sticking to Rimac's philosophy of creating know-how and jobs instead of outsourcing.

"That's why we are growing so quickly and becoming experts in different fields," said Rimac, who won financing from three international investors in 2014 and is now in a second round of fundraising.

Two Concept One prototypes, including the red vehicle unveiled in Frankfurt, were on display behind Rimac as he spoke to AFP, while nearby engineers worked on three cars to be delivered to the United States, Germany and Italy within a month.

The firm is producing a limited quantity of just eight Concept One vehicles for clients who are both motor fanatics and technology afficionados -- and can afford the hefty price tag.

The supercar may be Rimac's headline product, but he says it is only a showcase for the company's technology, from infotainment systems to battery packs, which aim to reach a far wider audience -- in ordinary cars, planes, ships, bicycles and wheelchairs.

"We are helping the world to go electric. Our business is to implement these technologies and help other industries to go electric," he said.

Spin-off firm Greyp Bikes, set up in 2013, produces high-performance electric bicycles that can reach up to 70 kilometres per hour. So far around 80 have been sold around the world for 8,500 euros each.

But he stressed that a better framework was needed to help the country's young entrepreneurs, who only succeeded "either by themselves or despite everything".

"We are creating our own little island here with positive young people... We are trying to be one of the sparks in Croatia that will trigger the change that is necessary," he said.