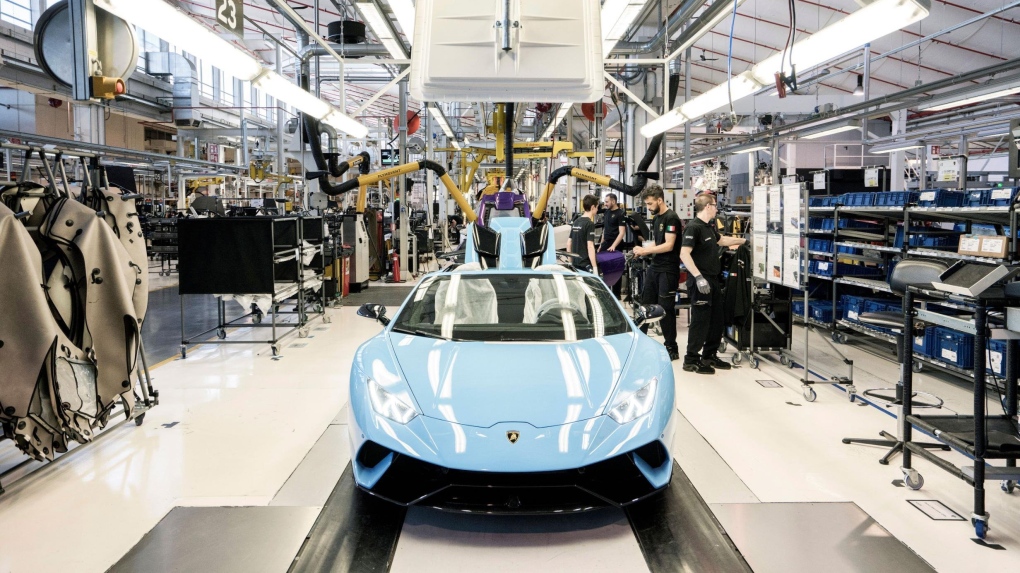 Certainly, there were fast, expensive cars before Lamborghini came along. But nothing was ever like a Lamborghini. The Italian automaker's creations were low to the ground and made to slip under the air. The engines were big and loud and sat right behind the two seats. The doors opened up into the air.

Now, the Italian automaker is taking on a new challenge: To develop a way to make supercars emissions-free, without using the lithium-ion batteries other automakers are relying on.

Today's battery technology simply won't do, insists Maurizio Reggiani, chief technical officer at Lamborghini. Batteries are too heavy, too bulky and they can't perform at a high level for long enough. After a lap or two around a twisting race track at speeds reaching 160 miles per hour, where fast acceleration and hard braking are repeated over and over, a battery can begin to give out. Also, batteries are bulky and heavy and weight is the enemy of high performance.

Lamborghini has been working with researchers at the Massachusetts Institute of Technology since late 2017 on two possible solutions. One is a new form of battery made from carbon that can actually make up some of the internal body parts of the car so they don't add size or weight. The other is a different kind of energy storage altogether: a supercapacitor.

"A supercapacitor with the same power is three times lighter than the normal lithium-ion battery," explained Reggiani. "This is important because, in terms of packaging and in terms of weight, it gives me a big advantage in a super sports car."

If you've ever walked on a shaggy wool carpet then gave someone an electric shock, you've acted as a capacitor. Your body stored up an electric charge and released it quickly.

The main advantage of supercapacitors is that they can deliver a bigger jolt of power, pound for pound, than batteries -- without heating up or degrading. That's great for supercars, where bursts of power and speed are needed.

But today's supercapacitors aren't as good at storing energy as batteries. Supercapacitors have been used to power city buses that recharge at each stop. In the time it takes passengers to get on and off, the bus can charge enough to make it to the next stop and recharge again. That's not an ideal solution for a car, though.

Lamborghini and MIT are working to solve that problem. They announced this week that MIT researchers have invented a new material that could allow the creation of supercapacitors capable of holding two to three times as much energy as the supercapacitors now being produced.

It's significant progress in just a couple of years, but that still puts the technology at about half the energy density -- or energy storage per unit of volume -- of lithium-ion batteries, said Riccardo Parenti, head of concept development at Lamborghini.

It's an insane sounding technological long shot, but this technology could dramatically change the world of high performance cars -- if this team of university scientists and auto company engineers can figure it out.

Lamborghini has a proven track record when it comes to long shots, though.

There are various stories about the beginnings of the company, most involving a dispute between founder Ferruccio Lamborghini and a haughty Enzo Ferrari, the founder of Ferrari. The gist of the tale is that Lamborghini, a Ferrari customer at the time, loved the way the cars drove but was dissatisfied with their durability and refinement. Based on his experience running his tractor company, Lamborghini had some suggestions as to how Ferrari could make his cars better. Ferrari, the stories go, told Lamborghini just where he could put his nice ideas.

Undeterred, Lamborghini decided to make his own cars instead. He built a factory in Sant'Agata Bolognese, Italy, not terribly far from Ferrari's headquarters in Maranello.

The company's first models, the Lamborghini 350GT and 400GT, were handsome, classically proportioned grand touring cars with long hoods and strong 12-cylinder engines. Then someone had a radical idea. It was the 1960s and the Ford GT40 race car was competing in the Le Mans 24-hour race. The car's design, with its big V8 engine mounted behind the seats, caught the attention of Lamborghini engineer Giancarlo Dallara.

"'Why do we not make a car with a rear engine?,'" Dallara recalled telling Lamborghini. "And Mr. Lamborghini immediately said, 'Yes, do it!"

The Turin-based design firm Bertone and its new designer, Marcello Gandini, were chosen to come up with the body. The result was the beautiful Miura and it was a sensation. With the Miura, Lamborghini captured the world's attention.

But it was Lamborghini's next supercar, the Countach, that would have an even bigger impact.

The Countach's engine was mounted back-to-front instead of side-to-side. That meant the seats had to move even further forward, almost to the front wheels. That alone gave the car unique proportions. Gandini also gave the car a body covered in sharp, aggressive angles and lines.

While the team worked on a mock up of the car, one very large and rough craftsman was astonished by what they were creating, Gandini told CNN Business. "Countach!" the man kept saying over and over as they worked, he recalled. At the time, in that part of Northern Italy, many people still spoke the local Piedmontese dialect. "Countach" was a mild curse word, the rough equivalent of "damn!" Gandini thought it would make a fine name for the car.

Introduced in 1973, the first production version of the Countach, the LP400, wasn't the best -- its numerous flaws in performance and handling were addressed in later updates -- but it is still regarded as the best-looking version of the car.

A nearly perfect double-pointed wedge, the Countach looked like it would chop through the air like a hatchet blade. The roof was so low that, instead of a rearview mirror it had a sort of periscope recessed into the roof allowing the driver to see behind the car. It was so wide that the doors couldn't open outwards so they swung upward.

The Countach came to define not just Lamborghini -- almost every Lamborghini model since has had the Countach as an inspiration -- but all sorts of high-performance supercars.

Lamborghini's new Aventador SVJ is very much a descendent of the Countach, with its V12 engine mounted roughly in the middle of the car. It relies on Lamborghini-invented technologies to harness the air flow over the car to improve cornering and acceleration. On a recent drive through mountain roads north of New York City, the Aventador SVJ felt glorious as it shifted gears through its seven-speed automatic transmission and whirled easily through turns at impossible-seeming speeds.

But it also consumed a lot of high-octane gasoline. With concerns mounting about global warming and the industry shifting away from internal combustion engines that rely on burning hydrocarbons, Lamborghini knows future descendents of the Countach will need to radically change.

Batteries, which power most electric cars today, would seem to be the logical solution for powering Lamborghini's next generation of supercars. Other automakers, including some closely related to Lamborghini, have had some success designing battery-powered supercars that can hit high speeds.

Lamborghini's sister brand Volkswagen -- both companies are owned by the Volkswagen Group -- recently set a lap record for an electric car on Germany's challenging Nurburgring race track with its ID.R electric race car. The same car had set the record for the fastest time ever by any car at the Pikes Peak International Hill Climb in Colorado.

Outside of Volkswagen, Rimac, a Croatian company, produces fully electric supercars costing millions of dollars with top speeds claimed to be well over 200 miles an hour. But, in terms of performance, its cars are more similar to a big, heavy Bugatti than a Lamborghini. They're fast when driven in a straight line, but aren't their best in sharp curves, founder Mate Rimac concedes.

Rimac admits that today's battery technology has serious limitations. But he believes many of the problems, such as overheating, will be solved eventually, he told CNN Business in an interview earlier this year. He just couldn't say when that might be -- just as Lamborghini can't say when supercapacitors might have energy storage capability to replace batteries or when smaller, lighter batteries could be incorporated into the car's body parts.

Capacitors and their stronger siblings, supercapacitors, have been used for things like camera flashes and to power electric motors in industrial settings. A supercapacitor powered the starter motor in that Aventador SVJ I drove, but the car relied on its V12 engine to drive.

As its next step, Lamborghini recently unveiled a hybrid supercar called the Sián that uses a supercapacitor instead of batteries to store energy that's used to add power to the car's 12-cylinder engine.

Just in case supercapacitor energy storage can't be improved enough, another lab at MIT is working on the new form of battery that could store energy in structural components of the car. These new batteries, made from carbon nanotubes, would free up all the space batteries usually take up.

In 2017, Lamborghini unveiled the Terzo Millennio, a concept car that the company envisions would use both technologies, said Parenti, with the structural batteries storing energy and feeding it to improved supercapacitors.

Reggiani won't say, yet, when he thinks a car like the Terzo Millennio might be possible. But as far as he's concerned, the usual approaches to making an electric car won't work for Lamborghini.

"The full electric vehicle, for us, must be like this," he said. "Otherwise, it cannot be a Lamborghini."