Is a self-driving truck with no windows the future of trucking? 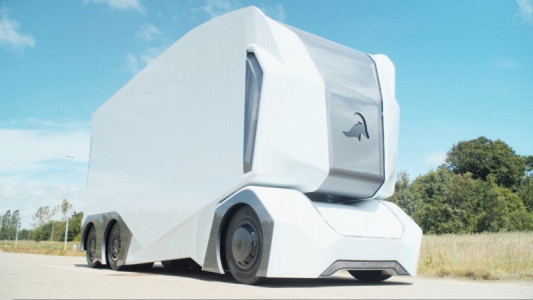 Einride T-Pod is an electric, self-driving truck with no windows. (Courtesy of Einride)

Hardly a day goes by at the moment without us hearing about more developments in the field of driverless cars, and it seems as though every major manufacturer is close to perfecting their own model that can drive without input from a human. However, a Swedish company called Einride has unveiled a prototype driverless vehicle that is addressing self-driving technology from an entirely different angle, and they could well be onto something

The vehicle in question is a windowless, driverless electric truck called the T-Pod, and not a passenger vehicle. While much of the focus for driverless vehicles has been on passenger cars so we can read a newspaper or eat breakfast on the way to the office while the car takes care of the driving duties, it's really the commercial vehicles that do the really long miles of mundane driving. Driverless cars could easily be seen as something of a novelty, but autonomous trucks really could completely revolutionize the entire logistics industry.

T-Pod is a prototype from Swedish company Einride that's essentially a giant box on wheels, which is around 23 feet long and is capable of transporting 15 standard pallets. Its electric motors are powered by a 200-kWh battery that means the T-Pod currently has only a 124-mile range on a full charge. There are no windows to see in or out of, and there isn't even a place for a driver to sit, which could lead people to believe this is something for a long way into the future. Most self-driving car technology is currently based on a premise of there always being an option for a human to take control of the vehicle if necessary, but the T-Pod addresses that in an entirely different manner. The T-Pod is designed to be able to drive autonomously on highways, but when it comes to urban environments such as city streets a human then takes over, but in this case, the driving duties are carried out remotely.

Einride is now working on the charging infrastructure required for the T-Pod, and ambitiously expects to have a finished truck available for customers later this year. By 2020, Einride intends to have some 200 units of the T-Pod operating on a route between Gothenburg and Helsingborg in Sweden, moving around 2 million pallets of cargo per year.