First Drive: 2015 Jeep Renegade is bigger than it looks Jeep calls their new 2015 Renegade as lovable as a Labrador puppy, but they don’t want you calling it cute as this little crossover is also highly capable and very much still a Jeep. The Renegade is one of several new entries that will be fighting it out this year in the competitive compact crossover segment..

Disclosure: Travel, accommodations, meals, and a predetermined route were provided to the author by the automaker. Vehicles driven were U.S. specification but Canadian versions are said to be of identical performance.

The Renegade is covered in modified X patterns, inspired by the reinforcing pattern stamped on military jerrycans. It shows up in the tail lights, roof panels, cupholder bases and so on.

Trapezoids meant to mimic the original Willys flavour the wheel arches and wheel cutouts. There are also “Easter eggs” the designers throw in like subliminal advert messages all over the place. There’s a Willys climbing in the corner of the windshield or in red on a Trailhawk wheel. I quit counting them at 20 but I’m sure there are more.

The traditional Jeep seven-slot grille and round headlights are there too of course. The windshield is fairly flat and upright but those big pillars won’t fold down, the window sills are scooped down for better visibility and with the black roof and chunky rear painted pillar the Renegade is somewhat reminiscent of a winged 60’s dune buggy.

All lower periphery is plastic to fend off wayward fallen branches, shopping carts and soccer balls. Like other small Jeep vehicles you can still see a bit of muffler below the rear bumper but it’s shaped like a skidplate that imparts a rugged impression rather than simply looking like parts hanging down.

Two “MySky” removable sunroofs are offered, and the panels can be stowed in a pizza bag beneath the cargo floor. Many available paint shades are non-metallic, including a green as close as you can get to Olive Drab, called Commando in yet another nod to Jeep heritage.

The cabin continues some of the whimsy with the Easter eggs scattered about and bright finishes for hardware like the speaker grille, vent and shift tower surrounds. Colour schemes range from basic black to cream-grey leather with orange trim and a chocolate dash, and there are enough soft-touch surfaces up front that you don’t feel slighted.

Since the Renegade is not that big, the upright centre section of the dash is actually skewed to the right of centre much like you see in GM’s full-size SUVs. This allows more room for the driver’s knee and instrument nacelle without unduly cramping the passenger’s leg space.

There is plenty of infotainment and safety technology packed inside, making it downright silly to have “Since 1941” stamped right about the touchscreen. The instruments provide analog revs and speed, dot-graph temperature and fuel, and a 3.5-inch display for lesser models. The Limited and Trailhawk trims get a more extensive, configurable, 7-inch colour screen to assure you will never get bored sitting in traffic. Console space was freed up replacing the handbrake lever with an electric arrangement. 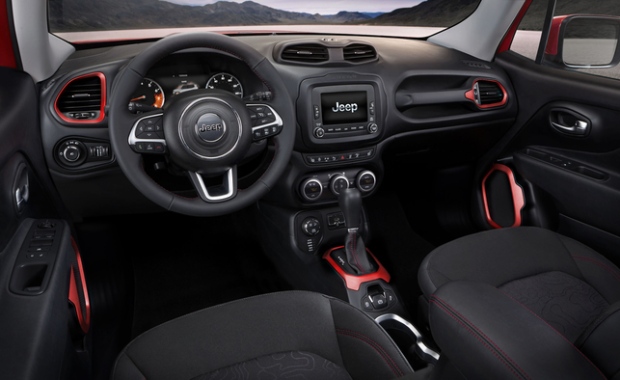 Although just 4.2 metres long, the Renegade is efficiently packaged. And while it’s much smaller outside than its big-brother Cherokee, the Renegade still has plenty of room for adults in both front and rear. The Renegade actually has the same shoulder room and more hip room in back than does the Cherokee. Legroom is also no more of an issue than in a Cherokee.

A 60/40-split seat is standard while a 40/20/40 with pass-through and armrest is available, and the right-front folds flat for long items on all but Sport front-wheel drive models.

The cargo area floor normally rides level with the hatch aperture, with a bin below; it can be stowed at a higher level where useful. All have a 12-VDC outlet in back and front, but Limited and Trailhawk trims also get a 115-VAC outlet and rechargeable flashlight. Cargo capacity is about 1,440 litres rear-seat folded and 524 seat up, not far behind Cherokee’s 1,550 and 700.

Fiat-Chrysler’s corporate Uconnect systems are present as elsewhere in the Jeep lineup, with the major difference being the Renegade’s top version is the 6.5AN system because the 8.4AN found in some other Jeep vehicles is simply too big. The functions are essentially identical though, only the size and some hard keys change and since the screen is closer than in a big truck, it’s just as easy to see and use.

Renegade offers two safety packages of equipment not even offered in some class-larger products, and you don’t need the top-line model to get them. One has blind-spot and rear cross-path warning, vehicle alarm and keyless entry/start while the other has forward collision warning with collision-mitigation braking, lane departure warning with correction and rear park sensors.

Unlike many challengers in the segment, the Renegade offers a choice of engines—not for all models but still better than no choice. Sport and North models get a 1.4-liter turbo with 160 horses and 184 lb-ft of torque from 2500 rpm—considerably more of both than Buick Encore’s 1.4 turbo. In the Renegade the 1.4 is quiet and paired to a six-speed manual. Limited and Sport models meanwhile get the 180-hp 2.4-liter “Tigershark” four paired with a nine-speed automatic, and this combo is optional on Sport and North.

The 1.4 manual has more torque over a broader range than the 2.4 and makes an amusing companion, especially in lighter front-drive versions. Clutch and shift are effortless, and it’s so quiet and geared tall you often forget to go to sixth until motoring along above the triple-digit threshold. It also lets you take advantage of the torque or horsepower regardless of where your right foot goes, but I miss the handbrake for uphill starts since it’s a little soft until boost whistles on.

Call for more in the 2.4 and it will downshift I don’t know one, two, maybe five gears for full acceleration. At work it seems louder than the 1.4 and at cruise quieter, perhaps because I couldn’t even get it into top gear until I was doing at least 110 km/hr. A 2.4L all-wheel drive is the only Renegade recommended for towing.

Consumption figures aren’t yet official, but on a predominantly rural highway I averaged mid-8L/100km in a low-mile front-drive 1.4, where a 2.4 all-wheel drive had done high-9s. Since the all-wheel drive disconnects the rear axle whenever it’s not needed, Jeep anticipates it won’t exact the typical all-wheel drive penalty on fuel economy.

Keeping the weight down aids mileage and dynamics, and the Renegade is 225-275 kg lighter than a Cherokee, 1381-kg for a base front-drive to 1520 for a 2.4 all-wheel drive. The only one you’d want to take off any road, the Trailhawk with its bigger tires, skidplates and full-size spare is 1621kg… which equates 1621 good reasons it doesn’t come with the 1.4. 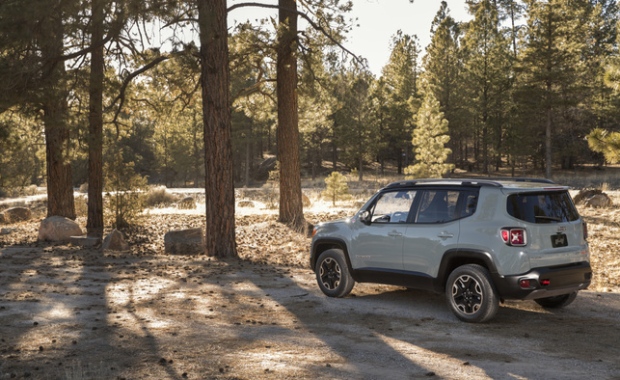 Renegade also comes with Koni FSD (frequency selective damping) shocks designed to provide good ride comfort on smooth roads and good control on rougher surfaces or at higher speeds. And it works, the Renegade is fairly nimble but not punishing, and can be encouraged to approach neutral balance into off-throttle corners. It’s solid and and quiet enough that only the missing lumbar support on a low-trim model accounted for any fatigue in 90 minutes. It won’t match a Nissan Juke Nismo on a winding road, but since the Renegade is out first we can only surmise the Mazda CX-3 and Fiat 500X are the only new challengers possibly more fun on the pavement.

All-wheel drive models use Selec-Terrain chassis management with auto, snow, sand and mud modes; just leave it in auto and it will do what’s needed. Trailhawk turns tighter and adds higher ride height, better clearances and a rock mode because of slightly lower gear ratios (20.4:1 rather than 17.6:1). It will handle more difficult off-road terrain than similar cute-utes but it will not handle what a Grand Cherokee or Wrangler will.

We expect the Renegade to start around $20,000 and run to around $35,000 for a loaded Limited all-wheel drive. Soul and Trax run less, Juke similar and Encore parallels the Limited model so Renegade is certainly competitive if not inexpensive. Or, if Renegade has enough space, consider it as thousands less than a Cherokee.

Most small utilities have more personality than larger crossovers and the Renegade does too. But it also offers a choice of engines and a more all-terrain capable version than the others, a wide variety of features and a bit of “I’m bigger-than-I-look” swagger.