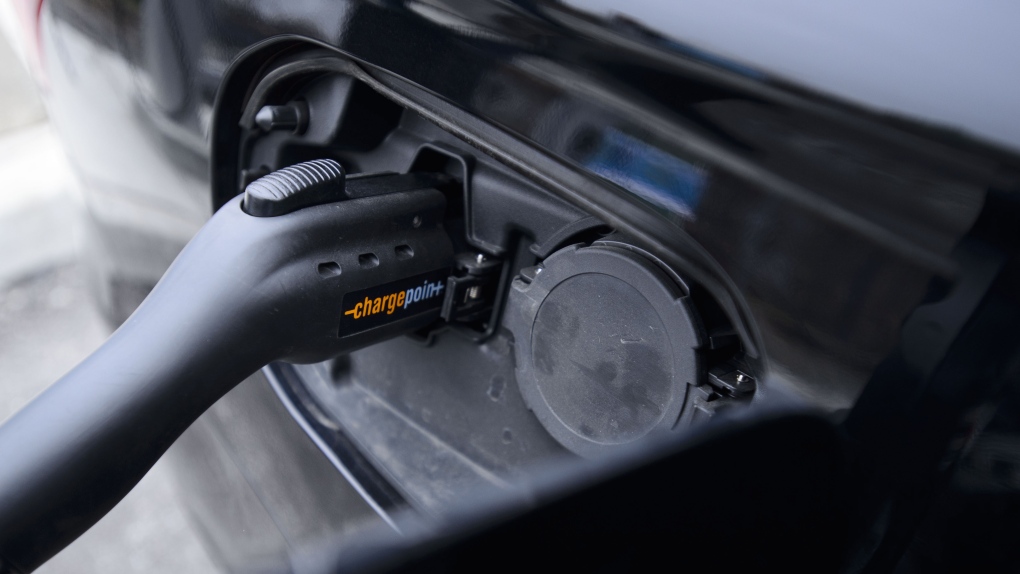 A car is charged at a charge station for electric vehicles on Parliament Hill in Ottawa on Wednesday, May 1, 2019. THE CANADIAN PRESS/Sean Kilpatrick

TORONTO -- The COVID-19 pandemic has pummelled Canada's automobile industry but it's the lack of supply that's helping to short-circuit electric vehicle adoption across the country.

Electric vehicle sales plunged along with gasoline-fuelled models in the second quarter of the year, when dealerships joined widespread lockdowns to prevent the virus's spread. As the economy reopens, consumers are starting to return to auto showrooms -- but finding an electric vehicle continues to be a problem, especially outside Quebec, British Columbia and Ontario.

A series of roadblocks are contributing to the shortfall, including battery shortages and manufacturers prioritizing shipments to China and Europe rather than North America. It's exacerbating difficulties that already existed.

"It's pretty challenging," says Jeff Turner, senior research lead at Dunsky and author of a recent report for Transport Canada that found two-thirds of Canadian dealerships didn't have any electric vehicles in stock before the virus struck.

Supply shortages are a global challenge and the distribution of vehicles isn't even across Canada. Few EVs are available outside three provinces, making it difficult to attract new converts.

There were 3,453 electric vehicles available at Canadian dealerships in February, down 21 per cent from December 2018. Quebec led with 1,944, followed by B.C. at 692, Ontario with 536, Alberta with 164, Manitoba 36, Saskatchewan 26, Nova Scotia 22, New Brunswick 21. There were eight electric vehicles available for sale in Newfoundland and Labrador and just four in Prince Edward Island.

The disparity in part is due to a wide difference in provincial financial incentives, which are intended to help increase consumer interest. As well, some dealerships have been reluctant to add EVs because of the added costs for consumer education, battery-charging infrastructure and the loss of potential service and repair revenues.

British Columbia and Quebec's shortage problems eased for a few months 2018 after the Ontario government cancelled its rebate program. That prompted manufacturers to move inventory to these leading EV provinces to meet the mandates of laws requiring minimum sales. (B.C. and Quebec both offer rebate programs for electric vehicles.)

"They're focusing that inventory in those provinces where they have targets to meet and so that's what's certainly contributed to some of the challenges in those other provinces that have slim pickings right now for EV shoppers," Turner said in an interview.

Even so, demand has outstripped supply in Quebec, resulting in waits that range from several months to a year. Long wait lists can be an impediment to sales, especially for drivers coming off leases, says Daniel Breton, CEO of Electric Mobility Canada.

On top of that, salespeople are showing some reluctance to push EV sales. After losing income for a few months because dealerships were closed for months early during the coronavirus, they're not eager to make a sale that would see them wait months for payment-on-delivery commissions, Breton said.

Among manufacturers feeling pressure is Toyota, which launched its new RAV4 Prime SUV last month only in Quebec. It's a plug-in hybrid electric vehicle (PHEV) in the popular SUV category that has an electric range of about 68 kilometres and uses gas for longer trips.

"We're starting in Quebec because we know that's where the highest level of demand is, but it's rolling out across the country," said Toyota Canada vice-president Stephen Beatty.

Some vehicles will be available in B.C. by the end of the year or early 2021 with other provinces getting the plug-in hybrid by the end of 2021. Toyota knew supply would be tight because there are waiting lists for other versions of the popular RAV4.

"You will see much improved inventories as we move into next year," he said, adding that the company expects electrified vehicles -- hybrids, plug-ins and fuel cells -- will account for 40 per cent of sales in Canada by 2025, up from 20 per cent last month and 10 per cent in the last decade.

Beatty noted the global shortage of batteries, but said the industry is on the verge of a significant shift in battery chemistry.

"Manufacturers are generally throughout the supply chain being cautious about over-investing in current technology when they see new types of batteries with much higher energy density and better pricing two, three years out."

Electric Mobility Canada is urging the federal government to boost its $5,000 financial incentive to $6,999 for SUVs and pickup trucks. It also wants to see federal incentives for people to purchase used EVs, which is offered in Quebec.

Although Ontario shed its incentive for new cars, residents are eligible for a private incentive of $1,000 from Plug'n Drive for those who buy a used EV and another $1,000 to those who also dispose of their gas vehicle, said Cara Clairman, CEO of the group. The incentive was provided for more than 500 used cars purchased since April 2019.

The political environment has also changed from a year ago when there were large marches around the world regarding climate change, making the topic front-of-mind for many consumers.

"It was a big deal. This year there is so much focus on COVID and kids going back to school; how is it going to happen, is a second wave going to hit us, so I can understand if some (people's) heads are not into this as much as they could have been," Electric Mobility's Breton said.

Clairman said she expects supply issues and the current bottleneck will be corrected over the next year or so. She'd also like to see a federal mandate that would require minimum sales of electric vehicles across the country, even though automakers aren't big fans of such a move.

Clairman added that she's optimistic that EV sales will bounce back after falling by 50 per cent in the second quarter.

"There has been a lull but I'm optimistic it's going to really pick up for the rest of the year."

This report by The Canadian Press was first published Sept. 20, 2020.