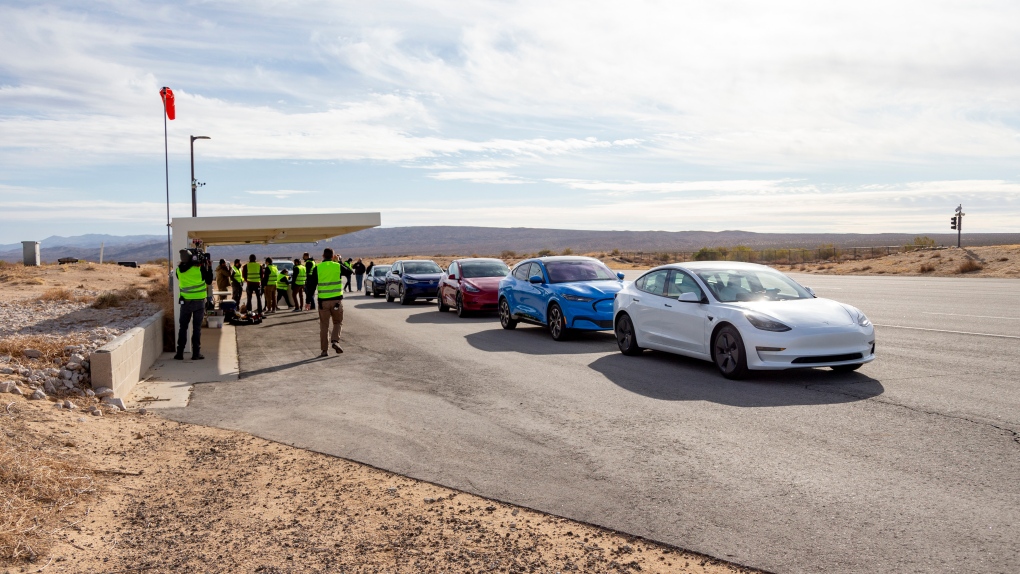 This undated photo by Edmunds shows five electric vehicles at a test track in the Mojave Desert, in California, undergoing testing for maximum range. (Scott Jacobs/Edmunds via AP)

Edmunds' test team recently published the results of its real-world range testing for electric vehicles. Notably, every Tesla the team tested in 2020 came up short of matching the EPA's range estimate. Almost all other EVs Edmunds tested met or exceeded those estimates.

That result, as you can likely guess, ruffled some feathers at Tesla headquarters.

A CHALLENGE FROM TESLA

The lacklustre results prompted the automaker to reach out to the Edmunds test team. Tesla's engineers disputed our figures and argued that by stopping our EV range tests at zero indicated miles, rather than pressing on until the battery died, we were underestimating their vehicles' true range.

Tesla said its vehicles have a safety buffer that ensures drivers can keep going even when the indicated range displayed zero miles. And when you factored in this buffer, Tesla argued, it would allow their vehicles to match the EPA range estimates, which are typically measured when the battery is fully depleted.

It was a challenge we at Edmunds were up for, so we rented a 7.5-mile-long closed-course oval at an unaffiliated automaker's proving ground in California's Mojave Desert. This facility allowed us to safely drive five EVs until their battery power completely ran out. Tesla provided a Model 3 Long Range for us to test. We also brought along the Edmunds-owned Model 3 Standard Range Plus and Model Y Performance used in our original range testing, plus two non-Teslas for comparison purposes: a Ford Mustang Mach-E and an Volkswagen ID.4. These were also provided by their manufacturers.

Most in-car range meters factor in your recent driving habits when forecasting the remaining range. Edmunds' editors needed to drive the vehicles in the same manner to normalize the range meters and provide a level playing field.

At the test track, we drove the five EVs at a common highway speed of 65 mph, with the automatic climate control set to 72 degrees, audio off, no accessories plugged in, and with drivers rotating in one-hour shifts, until the batteries were depleted. Once each vehicle's range estimate indicated zero miles, we measured how far it could go before coming to a complete stop.

Notice how the buffer can vary even within the same brand. The Model 3 Long Range went twice as far as the Model Y. What's more, there was no indication how far you could keep going since all vehicles simply read zero miles remaining. For all we knew, the cars could stop at any moment.

We also ran a control test on the Edmunds' EV range route with the Model 3 Long Range and Model Y Performance, driving them to the end of their battery life on public roads. The Model Y travelled 11 miles past zero and the Model 3 went an extra 17.5 miles; both were less than the buffers we experienced at the test track.

We asked Tesla about this discrepancy in the reserve range. The automaker said that the buffer was based on a combination of near-past conditions and instantaneous conditions, essentially the weather and terrain variation, which was why "the buffer cannot be defined exactly to a number every time."

TAKEAWAYS FOR THE EV SHOPPER

Some Teslas would be capable of meeting their EPA estimates in Edmunds' real-world range test if we included their reserve battery range, or the distance we travelled running beyond the point of zero indicated miles left.

But even in this scenario, there would be requirements such as driving conservatively in a temperate climate and using Tesla's maximum battery charge, even though Tesla recommends this for long-distance trips only.

The majority of Teslas we've tested so far -- four of the six -- do not meet their EPA estimates even allowing for a safety buffer. Furthermore, almost every other EV Edmunds has tested met or exceeded EPA estimates without the need to include their safety buffers.

Potential Tesla shoppers should know that to use the full range as advertised, they need to feel comfortable going past the zero indicated mile mark. This is not only risky, but it also requires the owner to deeply discharge the battery, which isn't recommended for the long-term health of the battery.

EDMUNDS SAYS: Edmunds' EV range test isn't meant to be the definitive word on a vehicle's range but rather a real-world complement to the laboratory-based EPA testing. We'll continue to test to an indicated zero because we'd never advise customers to rely on the unpredictable buffer range.

This story was provided to The Associated Press by the automotive website Edmunds. Ronald Montoya is a senior consumer advice editor at Edmunds.