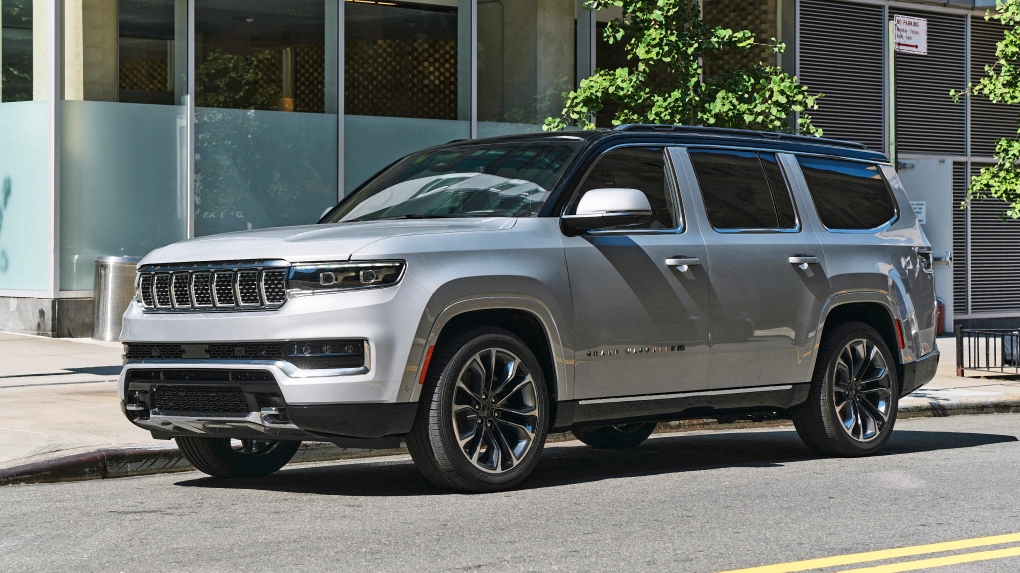 This photo provided by Stellantis shows the 2022 Jeep Grand Wagoneer. It is a large SUV that is the more luxurious version of the similarly sized and named Jeep Wagoneer. (Courtesy of Stellantis via AP)

Jeep has come out with a new three-row large SUV, the Grand Wagoneer. It dusts off a nameplate not used since the early 1990s and stands as the brand's most expensive and luxurious model. Immense power, impressive technology and a premium cabin are the highlights rather than Jeep's typical trail-busting capabilities.

Of course, there's another American SUV that plies these same gilded halls: the Cadillac Escalade. Since its recent redesign, the Escalade has been Edmunds' top-ranked large luxury SUV. Can the new Grand Wagoneer beat out the Cadillac Escalade? Edmunds' experts compare these rivals to find out.

The Grand Wagoneer offers two engine choices: the base 6.4-liter V8 engine that produces 471 horsepower and 455 lb-ft of torque and an optional turbocharged 3.0-liter six-cylinder that pumps out 510 hp and 500 lb-ft. In Edmunds' testing, the V8 was good enough to hustle the Grand Wagoneer from 0 to 60 mph in just 5.7 seconds.

That's a full second quicker than the Escalade, which comes with a 6.2-liter V8 with 420 hp and 460 lb-ft. Cadillac doesn't offer a more powerful engine upgrade, though there is an available turbocharged six-cylinder diesel that churns out 277 hp and 460 lb-ft.

This diesel is the fuel economy champ of the contest, earning an impressive EPA-estimated 23 mpg in combined city/highway driving. Otherwise, you're looking at 15-17 mpg for the Grand Wagoneer or 16 mpg for the V8-powered Escalade.

The Grand Wagoneer is expensive. The upscale SUV starts at US$89,995, including destination charge. But there's a reason for that sky-high starting price. Besides packing standard four-wheel drive, the Grand Wagoneer comes loaded with standard features such as premium leather upholstery, two large center touchscreens, a 19-speaker McIntosh audio system, an adaptive air suspension, and a full suite of advanced driver aids. Optional features are just as impressive.

The Cadillac Escalade has a much lower starting price of $77,990, though it doesn't include any of the above features as standard equipment besides a similar audio system. Comparable features, with the exception of the dual center touchscreens, are available on higher trim levels. The starting prices of the Escalade's highest trim levels, Premium Luxury Platinum and Sport Platinum, are only a few thousand less than the Grand Wagoneer's highest Series III trim that offers more features.

Value is pretty even, but there's one feature that tips the scales: Cadillac's Super Cruise system. This is a trick hands-free driving system that can be used on many freeways to help to reduce the monotony of long drives. Jeep doesn't currently offer a driver assist system comparable to Super Cruise.

Large SUVs are expected to offer a lot of cargo space, and the Grand Wagoneer doesn't disappoint. Behind the third row, you'll find 27.4 cubic feet of cargo space, and 70.9 cubic feet with the third row folded down. With the second and third rows folded, the Grand Wagoneer maxes out at 94.2 cubic feet. Its maximum towing capacity is a stout 9,850 pounds when properly equipped -- enough to pull a sizable travel trailer or toy hauler.

The Cadillac Escalade posts similar cargo numbers for typical use. There are 25.5 cubes behind the third row and 72.9 cubic feet behind the second. But drop both rear rows and the Escalade can hold a superior 121 cubic feet of stuff. There's also the longer Escalade ESV model, which is even roomier. Jeep plans to offer an extended-length Grand Wagoneer L, but it won't be out until the 2023 model year.

The Cadillac does come up a little short on maximum towing capacity -- 8,200 pounds in the right configuration -- but overall it's the more versatile hauler.

The latest Cadillac Escalade does an excellent job ironing out bumps and keeping the ride comfortable over rough pavement. The Grand Wagoneer isn't as impressive. It handles smaller bumps well, but larger ones and uneven pavement can create some uncomfortable body motions that could jostle passengers.

But Jeep claws back into contention in regards to seating. All three rows provide luxurious seating, and the front seats come standard with heating, ventilation and massage functions. The Escalade's front seats are pretty nice, but rear passengers aren't treated to the same levels of comfort as they are in the Grand Wagoneer.

Edmunds Says: Both models are impressive luxury SUVs, and picking one or the other isn't an easy choice. But overall we think the Escalade is the better buy considering its more flexible pricing, greater cargo capacity and exclusive hands-free driving system.

Michael Cantu is a contributor at Edmunds.