Despite higher price tags, it's cheaper to own an electric car over time: report 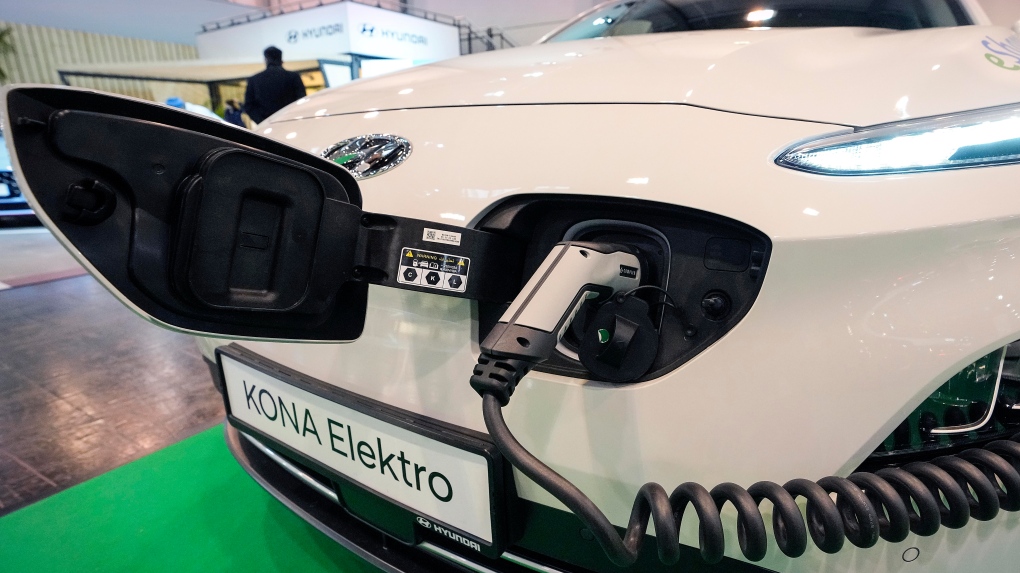 Despite higher price tags, electric vehicles are cheaper to own over time, according to a new report.

“Clean Energy Canada calculated the total ownership costs of equivalent electric and gas vehicles, from purchasing, to refuelling, to maintenance,” Clean Energy Canada’s clean transport program manager Joanna Kyriazis told CTVNews.ca. “In every comparison we made, the electric car comes out cheaper than the gas alternative.”

In addition to a vehicle’s sticker price, the analysis factors in costs like taxes, insurance, maintenance and repairs. Calculations for fuel were based on 2021 national averages: $1.35 per litre for gasoline, and 13.9¢ a kilowatt hour for electricity.

The report uses the Hyundai Kona as just one case study. Canada’s second-best selling electric vehicle (EV) in 2021 after the more expensive Tesla Model 3, the Kona is also available with a gas-powered engine, which is $20,000 cheaper. But over eight years, the report found the electric version cost $15,000 less to own.

“Yet despite the lower sticker price of the conventional car, the Kona’s EV model is a lot cheaper when all is said and done, with a $56,000 lifetime cost compared to $71,100 for the gas version,” the report said. 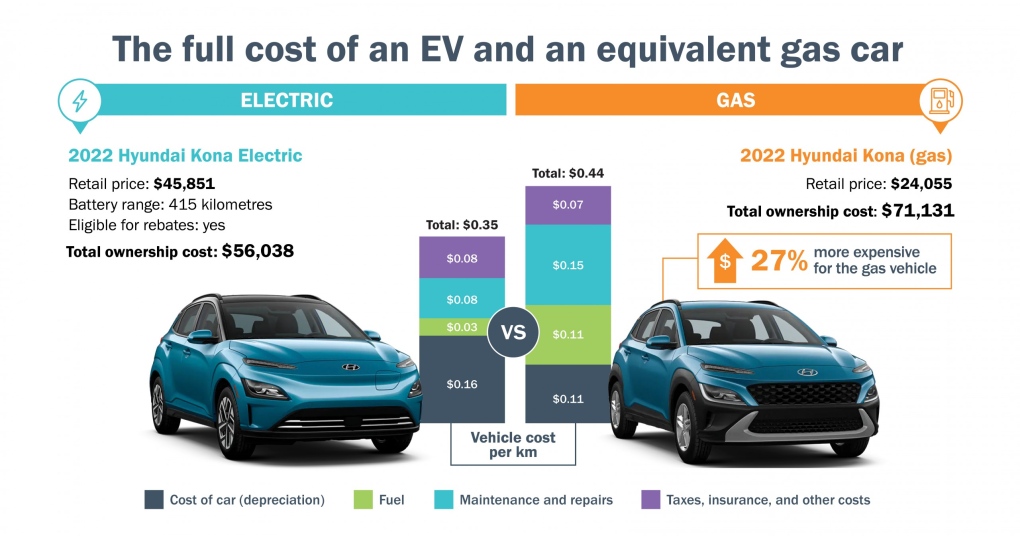 When gas prices were calculated at $2 per litre, which Canadians experienced this month, the estimated cost of owning the conventional Kona rose to $79,700 over eight years, which is nearly $24,000 more than the electric model.

“Without exception, the electric version of every car we analyzed was cheaper, usually significantly so,” the report said. “The only electric car that had close competition on cost was the electric Ford F-150 Lightning, which was only $2,700 cheaper than a gas F-150 (assuming 2021 gas prices) in part due to its high upfront cost and because the truck isn’t eligible for government rebates.”

The report comes as Canadians have been seeing record-high prices at the pumps, which have helped push up the rate of inflation and cost of living to a three-decade high.

“There are only around 20 moving parts in an electric engine, compared with nearly 2,000 in a gas car, so your EV will need a lot less maintenance generally,” Kyriazis said form Ottawa. “Plus, you won’t need a tune-up or oil change. What’s more, regenerative braking is used to recharge the batteries, which means a lot less wear on brake components.”

The report does not factor in costs for major repairs, like those needed after an accident. Electric vehicle parts are generally more expensive. The report also does not compare electric and hybrid vehicles, which typically run on a combination of electricity and gas.

As part of Canada's response to climate change, the federal Liberals recently announced accelerated plans for 60 per cent of all new vehicles to be electric by 2030, and 100 per cent by 2035. But for Canadians who want to do their part and get behind the wheel of an electric vehicle, there are often significant delays.

“The demand is there, but supply is the main issue,” Kyriazis said from Ottawa. “Most Canadians are still faced with wait times of six to 18 months to get their hands on an electric vehicle.”

⚡️ OUT TODAY ⚡️ Our new report compares the ownership costs of Canada's most popular #electricvehicles with gas-powered equivalents, finding that, in every case, the #EV was cheaper to own—usually significantly so.