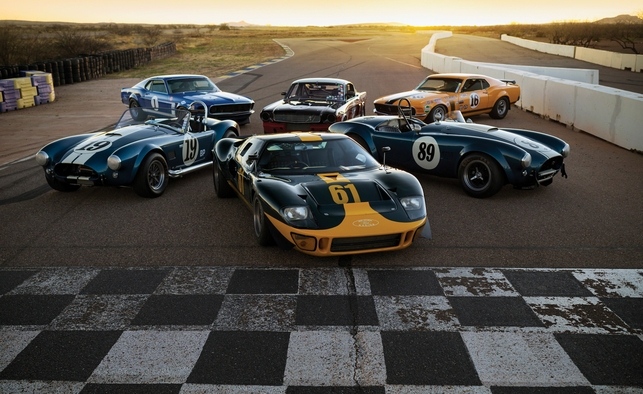 Six historic Ford Performance race cars worth several million dollars each will be crossing the auction block in late August at an event hosted by Chatham, Ontario-headquartered RM Sotheby's.

The six cars from the Jim Click Ford Performance Collection make up the first lots RM Sotheby's has listed for offer at its popular Monterey, California sale, the flagship auction held August 19 and 20 during the renowned Pebble Beach Concours d'Elegance.

Click, who owns 16 car dealerships in California and Arizona, is downsizing the collection of Ford performance vehicles he's been racing at historic motorsport events since 1991.

Among the vehicles he's offering for sale is a 1964 Shelby 289 Cobra, chassis CSX 2473, one of the most successful 289 Competition Cobras of all time. Former owner Don Roberts netted close to two dozen first-place trophies with the car between 1966 and 1984, and also maintained the car during its tenure under Click's ownership. It's expected to fetch $2.2 million to $2.6 million.

The sale is rounded out by two Ford Mustang Boss 302 Trans Am racers from 1969 and 1970, the former campaigned by the Shelby team with Dan Gurney at the wheel, among other drivers; and the latter by the Bud Moore team. They should return $1,000,000 to $1.3 million each.

Related: Ranked: The most expensive cars ever sold at auction

RM Sotheby's has hosted this sale in Monterey for more than 30 years, and expects to feature some 100 collector cars during the two-day event. The auction takes place during the Pebble Beach Concours d'Elegance hosted nearby, one of the largest and most well-respected concours in the world.