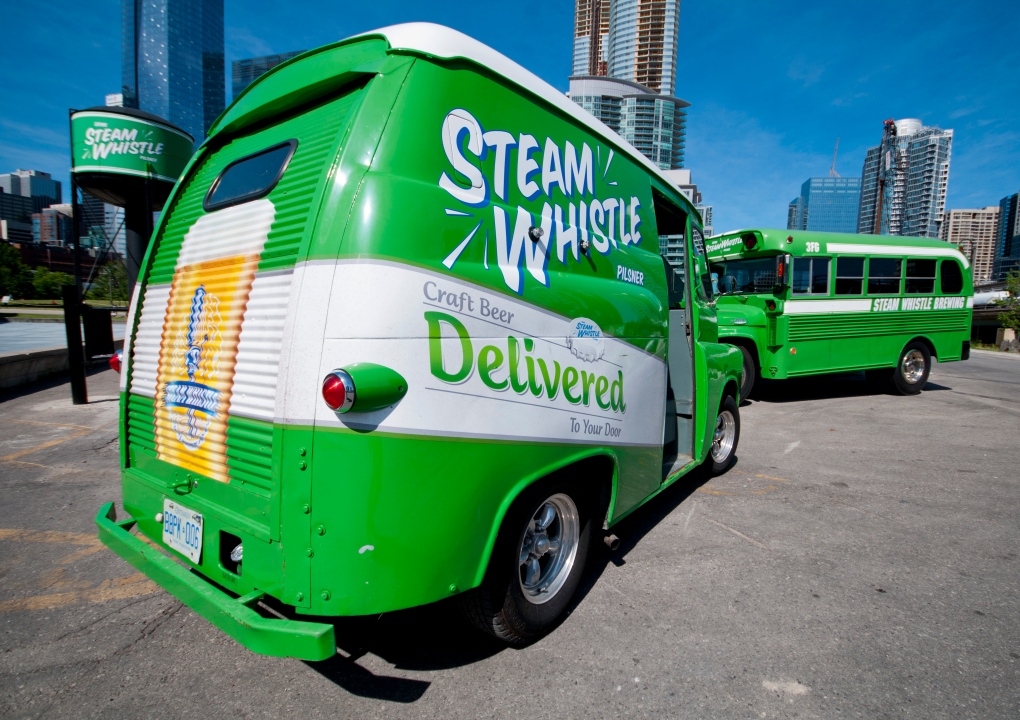 When Greg Taylor and Cam Heaps and Greg Cromwell set out to start their own brewery, their goal was simple: create a vintage-style premium pilsner that could compete with the best beers in the world. The result was Steam Whistle Brewing, a retro-modern brewery nestled in Toronto’s historic John street roundhouse.

In keeping with their classic-feel, the pair knew they had to find the right sort of delivery vehicles to match the brand's philosophy. So Taylor and Heaps went back to the drawing board, thinking about their experiences working together at their first brewery.

“We looked at these beat-up white delivery vans and we had an idea: What if we took them to this big graffiti festival in Toronto?” Taylor explains, noting the event was more about spraying up walls and billboards than old white panel vans.

The penny dropped for Taylor while driving back afterwards, when he noticed people were cheering and smiling at the now-graffiti-adorned van.

“People everywhere were yelling ‘Yeah! Right on! Hey, nice van!’ and I’m like, Wow, people are really freaking out, this is great,” he says. “That’s when we said, Let’s get an antique vehicle that matches the brand’s old look and feel, and then drive that around.”

Lumpy is a 1949 International stake truck. He runs on bio-diesel, has a manual transmission, and was one of the first vehicles added to Steam Whistle's vintage fleet—not as a show truck, but as an actual beer delivery vehicle. 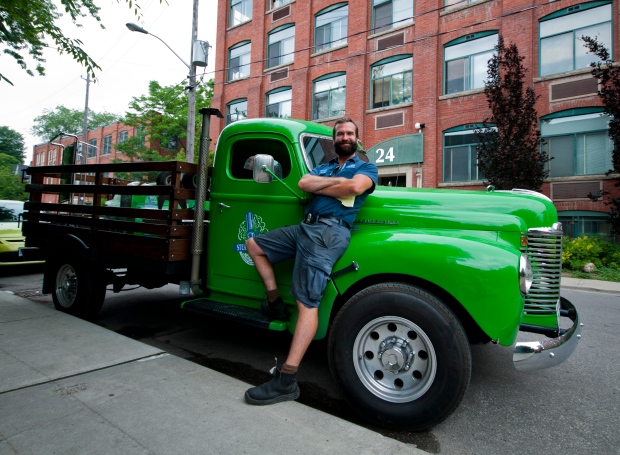 The name comes from Lumpy’s somewhat-rough ride according to Taylor.

Its driver Ben Taylor – no relation to Greg – calls himself an "ambassador of good times," and refers to the experience delivering beer with Lumpy as a "one-man parade."

"Cam and Greg encouraged me to drive it around because when you have it out on the road, people take photos, they laugh, and if I’m on the 401 [expressway], people will pull up beside me, honk the horn and wave, it's great," says Ben.

Don't be fooled by its old-fashioned styling, chuckles Ben, the 65-five-year-old Lumpy hauls beer like nothing else on the road.

"It should retire, but it doesn’t want to, it wants to keep working," he says. "I’d like to think the truck likes what it does and it has a personality. I’ll even refer to it as my 'bro truck.'"

“I don’t usually use first gear - second gear kind of serves for first gear, but hill starts, no problem. Got nice and used to it,” he says. “People also give it a bit of extra space.”

There's even a high-low gear selector when for when that extra oomph is needed.

"When I first started with Steam Whistle, few of the staff could drive, let alone drive stick, so I developed a bond with the truck," he says. "It’s like my partner-in-crime."

Ben – who's basically been the truck's sole driver for the last seven years – says he doesn't miss the boring desk jobs. And even though he holds a degree in English and theater, it's not like his daily entertainment is going to dry up anytime soon.

"Cramming an entire skid of beer and a few kegs in the back of Lumpy and showing up at someone’s house to just blow their mind is pretty awesome," he laughs. "It’s a daily occurrence."

'A beer and a laugh'

Chuckles (pictured below), a fully-restored 1956 Dodge Fargo van that likes to bellow out the familiar notes of a classic American V8 engine, is another member of the Steam Whistle Fleet sure that garners plenty of attention on the road. 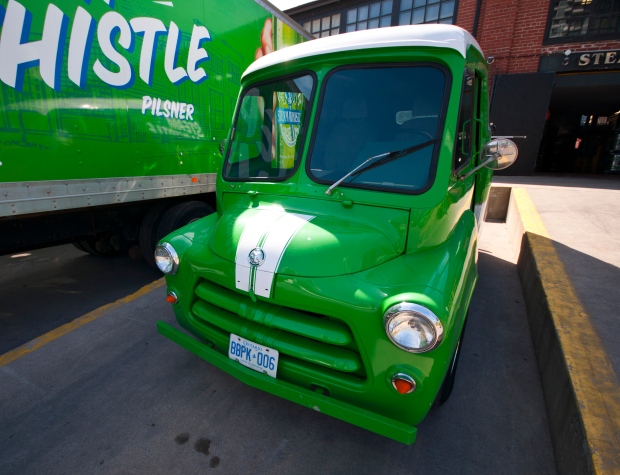 "We call it 'Chuckles' because everyone just laughs every time they see it," says Greg.

The van was formerly driven by a cosmetics business owner who was simply too embarrassed to be seen in it anymore Greg says.  After driving it only a week, she apparently told her husband - who spent two years restoring it - to sell it for something less—hilarious.

"He came to us and said, ‘You guys have all these vintage vehicles, are you interested in buying it?’ He wanted a lot of money on it initially, but a year later he came back and sold it to us for half-price," Greg says.

For a while, Chuckles was one of the brewery's primary delivery vehicles, even though it didn't have the proper hauling capacity like its sibling, Lumpy.

"They're loud, unusual, and totally pimped up"

Another member of the Ontario fleet, the Party Bus, is ostensibly the gentle giant of the bunch: the Arizona-sourced bus carries up to 20 people to and from the brewery, runs on an efficient turbo-diesel engine, and is completely decked-out with a sound system and 13-inch LCD screen. 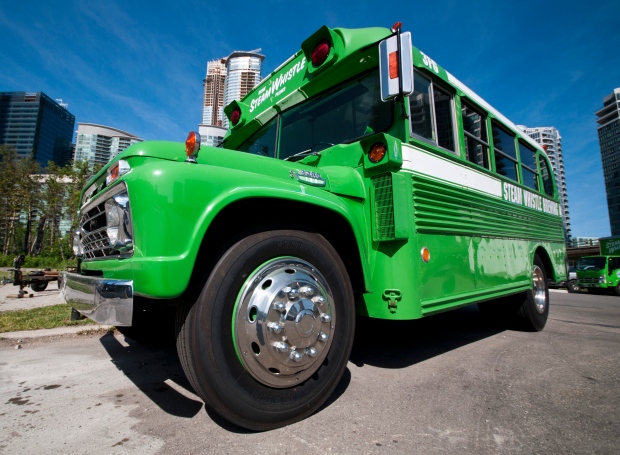 And, like all of Steam Whistle's vintage vehicles, the Party Bus is equipped with a programmable horn, so, yes, it can actually make a Steam Whistle noise.

The vintage Steam Whistle fleet now stands at 12 vehicles, and not all of the old autos call Toronto home.

Vancouver meanwhile is home to "Retro Electro", a fully-electric '58 Chevy pickup that runs on wind power.

Since the vehicles are good at making impressions everywhere, Greg says it was important to send them all over Canada to spread what the Steam Whistle brand is all about.

"We're going for a retro image encompassing an age of innocence, of quality, something that appeals to a broader demographic and age," he says. "To older folks it's relative, because they used to drive these things, and even little kids like them because they are just so different than anything else on the road." 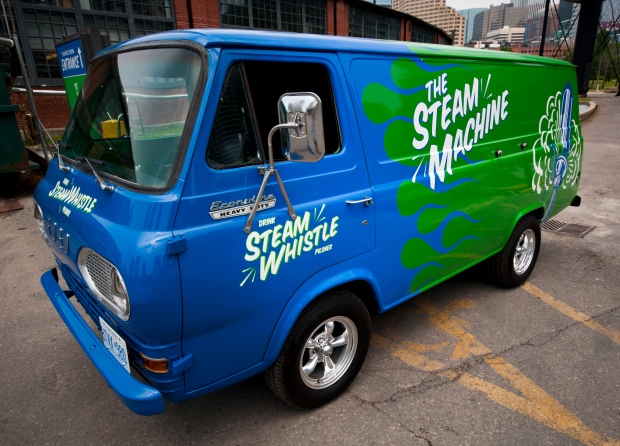 This is Steam Machine, a 1967 Ford Econoline Heavy-Duty van that has become somewhat of an icon for Steam Whistle, thanks to its blue-on-green flames, hot rod wheels and its _Scooby-Doo_ Mystery Machine-ish profile. It also happens to feature built-in beer taps on its side.

"When you go to an event and you’re pouring draft, you pull up into a backyard, put a table out front and you got yourself an instant bar," Greg says. "Your keg’s inside so you don’t have to take anything out, everything’s chilled in there and out of the sun. People love it when we pour beer from the side of it."

Keeping all these wheeled wonders out on the roads takes some extra effort, though, from a management and maintenance perspective.

"It’s a complicated business coordinating all the vehicles you have, especially when a portion of them are almost always off the road. That’s just the reality," Greg says, a smile appearing from the corner of his mouth.

"Frankly, it's a labour of love. There’s always something new, people are always sending us ideas for the vehicles, so it's fantastic to have that bond with the community and our customers."