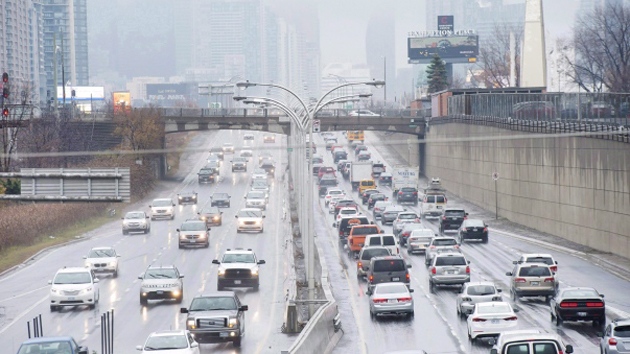 Vehicles make their way into and out of downtown Toronto along the Gardiner Expressway in Toronto on Thursday, November 24, 2016. (Nathan Denette / THE CANADIAN PRESS)

TORONTO -- Three provincial courts have approved $25.6 million in settlement funds for motorists affected by alleged price-fixing in the automotive industry.

Courts in B.C., Ontario and Quebec have given the green light to distribute payments to Canadians who bought cars that were involved in an investigation into wire harness systems, which distribute electricity around a vehicle.

“There have been extensive criminal investigations around the globe,” reads a press release on behalf of Siskinds, Sotos and CFM law firms.

“The auto parts cases make up the largest antitrust investigation in history – in terms of the number of affected parts, implicated parties and fines imposed.”

The law firms behind the class action lawsuit said consumers and businesses who bought or leased new vehicles under the Honda/Acura, Nissan/Infiniti, Toyota/Lexus, Subaru and/or Pontiac Vibes brands, between January 1, 1999 and November 30, 2014 are eligible to apply to receive compensation.

The defendants in the case do not admit any wrongdoing or liability and the law firms emphasized that the car manufacturers were unaware of the alleged price-fixing.

“This plan represents an opportunity for consumers and businesses to recover overpayments on millions of vehicles sold in Canada,” said Charles Wright, a partner at Siskinds in London, Ont.

Applications for settlement benefits can be filed online at autopartsettlement.ca on or before June 12, 2020.

Payments will be proportional, based on the “value of your claim relative to the value of all approved claims,” according to the settlement site.

“It is anticipated that all claims will receive a minimum payment of $25,” the website reads.

The automotive wire harness systems class action is one of more than 40 ongoing class actions in Canada alleging price-fixing of auto parts for installation in new vehicles.

“It is our hope that through continued work with our colleagues in London, Vancouver and Quebec, we will put additional repayments into the pockets of Canadians in the coming years,” said David Sterns, a partner at Toronto-based Sotos LLP.