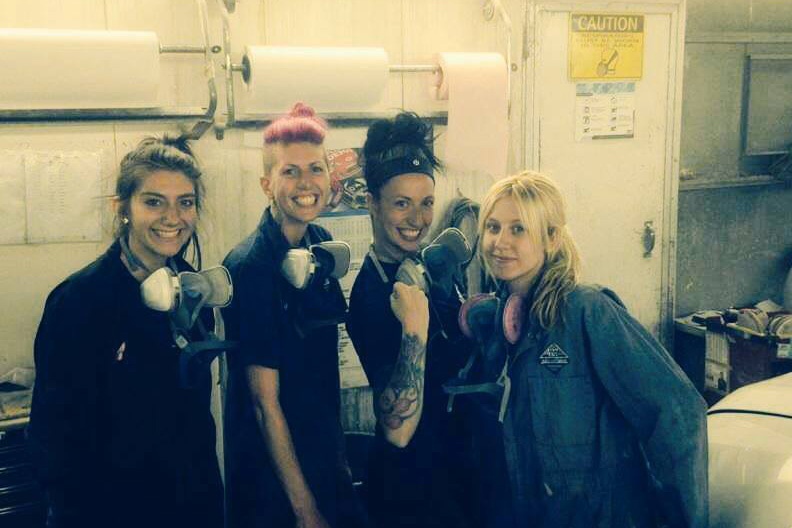 She has had a passion for muscle cars and hot rods since she was a teenager and worked with a shop to restore her first car, a 1970 Oldsmobile. She turned that apprenticeship into a diploma from Centennial College, got a job at Toronto’s well-known Legendary Motorcar, then went back to her alma mater to teach. She’s been instructing in the auto body and collision damage repair apprenticeship program for four years now.

But Noack’s always dreamed of owning her own restoration and customization garage. The concept for Ink&Iron, an all-girls shop, evolved as she met and more and more talented women in the trade. “I kind of just thought ‘Hey, this would be a really unique and kick-ass business idea!’” she says.

“[I wanted] to provide a positive training environment for other young ladies who want to explore careers in auto body,” Noack explains. “And to set an example for any other young females considering getting into the automotive field, [to show them] that they can do it!”

While she already had most of the tools necessary to get a garage started, she still needed to raise some capital, and a traditional bank loan just wouldn’t do. “I figured crowdfunding is a great way to test drive your business idea and help promote your business,” Noack says. “It’s a win-win situation! The reaction has been great so far!”

Since it launched January 29, the Indiegogo campaign for Ink&Iron has raised more than $1,000 of its $20,000 goal. Noack already has a team together – made up of fellow auto body experts Alexandra Leith, Olivia DiGianfelice and Heather Toner – and is looking at shops for rent in Toronto’s west end.

Even if they can’t crack $20,000, Noack is not giving up on the dream. “There will always be the people who think that girls can’t or shouldn’t do this job, but I think that’s bull...,” she says. “There’s always a risk of failure, but you miss 100 percent of the chances you never take.”

The Ink&Iron campaign at Indiegogo is now active and accepting funds until March 10, 2015.