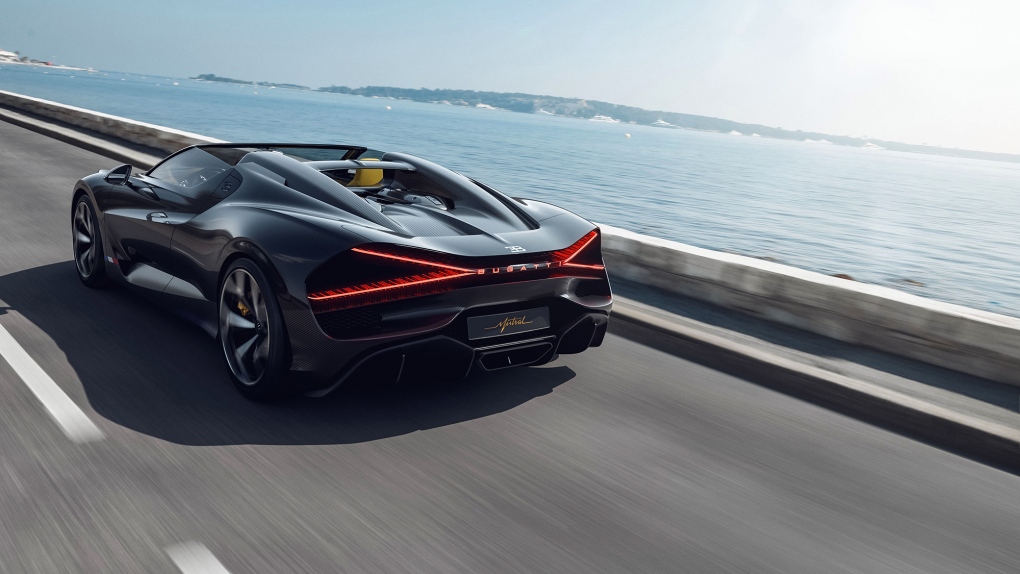 Bugatti has unveiled what the French automaker hopes will be the world's fastest convertible. (Bugatti-Rimac via CNN)

Bugatti has unveiled what the French automaker hopes will be the world's fastest convertible. The 1,600-horsepower, $5 million W16 Mistral is, essentially, an open-topped version of the Bugatti Chiron supercar, though there are major design differences.

It is also Bugatti's last gasoline-only car. Future models will be hybrid.

Only 99 Mistrals will be made and all of them were already sold before the car was even unveiled to the public on Friday in Carmel, California, according to Bugatti.

"There can only be one goal in mind: to become the fastest roadster in the world once more," the company said in its announcement.

Bugatti has not said what the expected top speed of the Mistral might be. The last time Bugatti could claim to have the fastest convertible in the world was in 2013 when a Bugatti Veyron Grand Sport Vitesse cabriolet went 254 miles an hour (408 km/h) on Volkswagen's test track in Germany.

The current top speed record for convertibles is claimed by the Hennessey Venom F5 Roadster made by Hennessey Performance Engineering of Texas. That $3 million, 1,800-horsepower car reached a speed of 265.6 miles an hour (427 km/h) in 2016.

Convertibles usually have lower top speeds than hard-top cars because of their poorer aerodynamics.

The Mistral will also be the last model to have Bugatti's famous W16 16-cylinder engine. Mate Rimac, CEO of Bugatti-Rimac, the company that now owns the Bugatti brand, said future Bugatti models will be hybrids. It is unclear what sort of gas engine those future models will have, but it will not be the same W16 that, with various developments and improvements, has powered every modern Bugatti car since 2005.

The version of that engine used in the Mistral is the same one that powered the Bugatti Chiron Super Sport that Bugatti claimed in 2019 was able to reach speeds of almost 305 miles an hour (490 km/h).

Air for the Mistral's big engine is drawn in through air scoops behind each of the car's two seats. The air scoops are made from carbon fiber and are designed to support the entire weight of the car to protect occupants in the event of a roll-over crash. Air intakes on the side of the car are for the oil coolers. The air that passes through the oil coolers is vented out through the Mistral's X-shaped taillights.

The Mistral's design was inspired by the classic 1934 Bugatti Type 57 Roadster Grand Raid. Specifically, Bugatti's designers looked at one Roadster Grand Raid that is currently on display at the Louwman car museum in the Netherlands, according to Bugatti. The car's sharply angled V-shaped windshield and humps rising behind each of the seats are among the similarities to the modern car.

The front of the Mistral has its own distinctive design with headlights each made of four light bars. The central horseshoe-shaped grille is also deeper and wider than on the hard-top cars.

The first cars will be delivered to customers in 2024, according to Bugatti. Bugatti was spun off from the Volkswagen Group in 2021 and is now partnered with the Croatian electric supercar maker Rimac. Bugatti manufacturing remains at its traditional home of Molsheim, France.