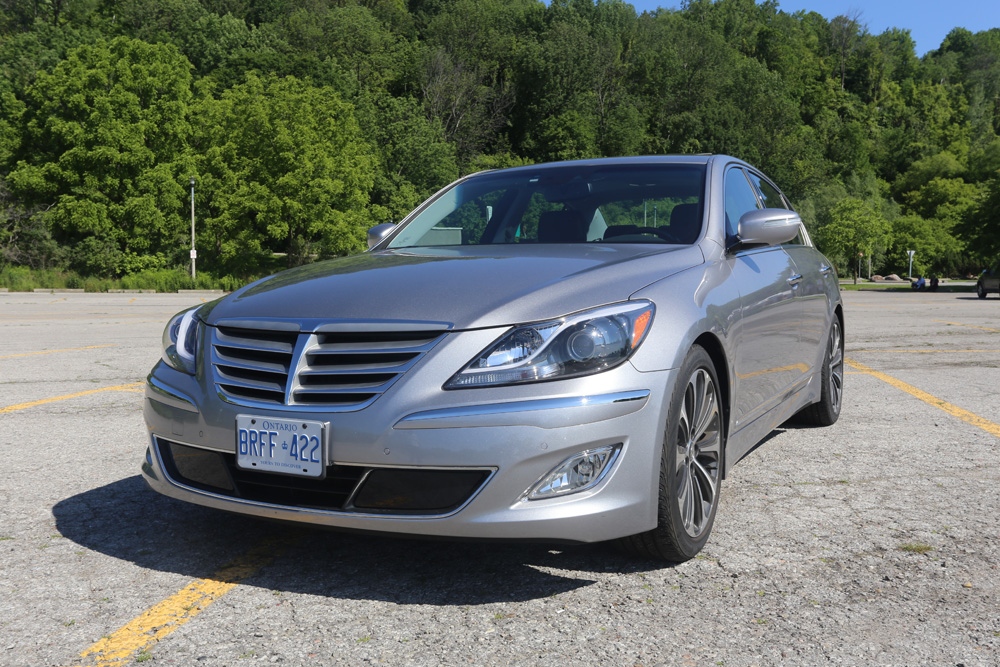 Performance and luxury.  The words bring to mind the popular three German manufacturers – never Hyundai. But with the 2013 Hyundai Genesis Sedan R-Spec, that has changed

A headturner from all angles, the Genesis Sedan is targeted directly at those that want the looks of a Mercedes, but can’t afford the sticker price. Starting at $39,999 before taxes, the base model Genesis Sedan is powered by a 333 horsepower 3.8-litre V6 engine and comes equipped with both rear-wheel drive and an 8 speed automatic transmission.

The model I drove, the R-Spec, ramps up almost everything. With the R-Spec, the car is powered by a 429 horsepower 5.0-litre V8 engine and is priced at $53,499 before taxes, and is still teamed up with the rear-wheel drive and the 8 speed automatic – though both are now more tuned to the power, giving you the performance, yet ease.

In fuel economy, Hyundai says that the Genesis Sedan R-Spec can do:

On my tests in the city, I saw improved mileage in the city, but just did slightly worse on the highway and combined:

– and that’s all with having the A/C on, the cooled seat and keeping up with traffic.

A ‘woosh’ instead of a roar

The R-Spec was a very easy car to handle. Rather than getting a loud roar from the V8, when you casually accelerate from a standing stop, the car “wooshes” you along, making the drive very comfortable. That’s not to say that it can’t roar with the best of them, just that it’s more luxury than performance.

The R-Spec can handle the city as easily as it can handle the highway. Even though the car is as wide as its competitors, it doesn’t feel as wide. You don’t get the feeling that you’re getting squished when you drive this car through the city.  And you’ll be hard pressed to find it difficult to parallel park this car. Parallel parking the R-Spec is super easy with the optional parking sensors and backup camera, and with the almost no blind spots, you wouldn’t even need to use the sensors.

Ride comfort is fairly comfortable. It doesn’t handle like a luxury performance sedan, more like a luxury sedan. You feel the bumps of the road, but its not bone jarring. And with their road-noise reduction techniques, even on the performance tires, the car was extremely quiet. And that’s both inside the car, and outside.

The Genesis Sedan, like all cars on the market now, has automatic headlights, but I found that they were a little too sensitive and would kick on if I was in the shade of a transport truck. To eliminate this, I usually drove the headlight sensor turned off until it was either getting dark or was raining and then just turned them on.

Speaking of night time driving, this car had a few tricks up its sleeve. On top of having the auto-dimming rear-view mirror, the R-Spec also has auto-dimming side mirrors, so you’re no longer blind by the fools who still have their fog lights on on a clear night.

Inside the car is very comfortable. It doesn’t come with as many features as a Volvo, but the R-Spec still has a lot of bells and whistles. From a lane departure warning system, to the parking sensors and backup camera, the R-Spec can still help you keep your eyes on the road.

In this heatwave we had, one of my most favourite, yet odd feeling, features has to have been the cooled driver seat. Now, yes a few of the other cars I’ve driven have the cooled seats, and this is not something new on many cars, but when you get into the car, with its leather seats, it’s nice to know that in a couple of seconds you can be sitting on a cool seat, rather than sweating it out on a hot leather seat.

Hyundai have also made sure that not only is your summer drive comfortable, with the cooled seats, but also your winter drive is as well – with a heated steering wheel and heated seats for all passengers. And that includes the back seats, which have lot of leg room, surprisingly, for a car this size.

You’d think that with all this space inside, that there’d be no space in the trunk. But opening up the cavernous trunk, I found that I’d have no trouble fitting in two full sets of golf clubs.

The Genesis Sedan R-Spec might never be a Mercedes but for those that like that look and can’t afford it, this is a great alternative. 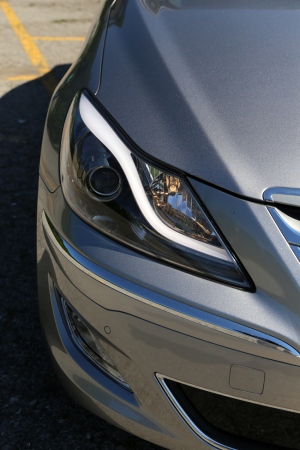 A closer look at the 2013 Hyundai Genesis Sedan R-Spec