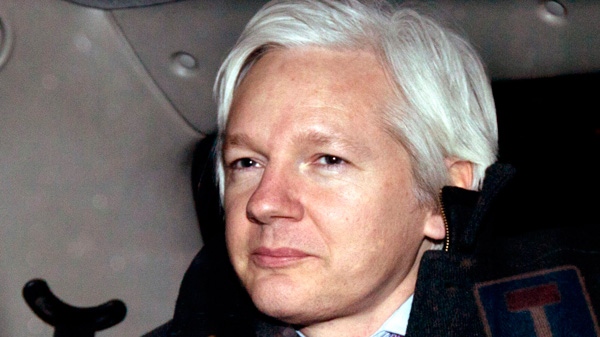 WikiLeaks founder Julian Assange is driven away in a taxi after leaving his hearing at the Supreme Court in London, Thursday, Feb. 2, 2012. (AP / Matt Dunham)

LONDON - Sweden's public prosecutor was right to demand the return of Julian Assange, a lawyer told Britain's Supreme Court Thursday, saying that failing to hand over the WikiLeaks chief would break with precedent and wreck European extradition rules.

Clare Montgomery, the lawyer for Sweden's prosecution service, struck back at Assange's legal team's argument that only impartial authorities such as a judge can properly issue European arrest warrants.

"The English notion of an arrest warrant issued by a court is very much an exception," she said, warning later that if the U.K. Supreme Court insisted only honouring judge-issued warrants "it would make it impossible for possibly eight, possibly more European partners" to extradite suspected criminals.

She named several European countries -- including Denmark, Finland and Sweden -- which allowed prosecutors or justice ministries to pursue extraditions. Refusing them the right to do so, she said, would "break with long-standing state practice."

The point is a technical one, but it's critical to Assange's 14-month struggle to avoid extradition to Sweden where he's wanted on sex crime allegations stemming from encounters with two Swedish women during a trip there in 2010.

He denies the accusations and has refused to return to Sweden, saying he fears the case against him has been manipulated for political ends and that he wouldn't receive a fair trial.

Experts interviewed ahead of the case said that the weight of legal precedent gave Montgomery the upper hand.

British judges have tended to defer to foreign judicial systems when considering whether to endorse European arrest warrants, which fast-track the exchange of suspects between European countries. Extradition specialist Karen Todner said earlier this week that she would be "very surprised" if Assange's team triumphed.

The hearing ended Thursday with a rebuttal from Assange lawyer Dinah Rose, but a judgment isn't expected for another few weeks.

Assange's legal battle -- combined with an embargo imposed by U.S. financial companies -- has taken its toll on the secret-spilling website, which has suspended its publishing operations to focus on fundraising. Assange himself has spent much of the time under virtual house arrest at a wealthy supporter's English country mansion and is currently staying at an undisclosed location.

Assange was in court Thursday, smiling as he walked past protesters waving "Free Assange" placards.