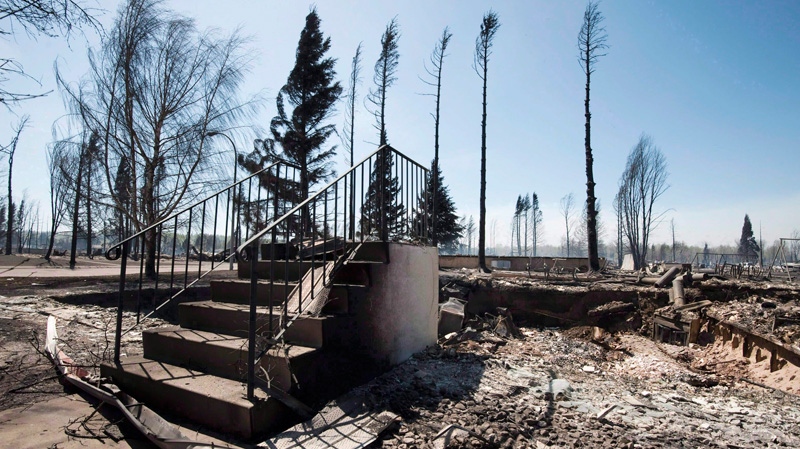 Experts are looking south of the border for ideas on how to better protect municipalities and homes in Canada's forests from being ravaged by wildfires. All that remains of a house in Slave Lake, Alberta, is a set of steps on Monday, May 16, 2011. (Ian Jackson / THE CANADIAN PRESS)

EDMONTON - Alberta is launching a formal review of how well it responded to a fire last May that destroyed a large portion of the town of Slave Lake.

The consulting firm KPMG will interview emergency responders who handled the evacuation and some of the 7,000 residents who were forced to flee their homes.

"The review will (first) focus on collecting feedback and insights from the emergency responders and that's basically ... to free them up during this year's wildfire season, which is underway now," Municipal Affairs spokesman Jerry Ward said Monday.

"Later this spring, we're going to get input from the residents and get their insights as well as to what we did well and what could be done better -- both in response and short-term recovery efforts," Ward said.

All interviews will be on a voluntary basis, he said.

"We're going to have people on the ground from KPMG and they will be making themselves available for the general public to come in and discuss their insights into what happened."

KPMG is to submit an interim report by the May 15 anniversary of the fire that destroyed 400 homes and caused more than $700 million in damage.

A final report with recommendations is to be presented to Municipal Affairs before the fall.

Ward said the review isn't intended to find blame or legal liability, but to learn how the government can do better in the future.

The review is separate from another government study underway into the conditions that led to the fire and how it was fought. That report is to be released this spring.

It's believed an arsonist ignited the blaze that left 2,000 people homeless, but no arrests have been made.

Some residents complained in the fire's aftermath about not being given ample warning to leave. Some who left on their own were forced to turn around when roads were closed.

Municipalities are responsible for ordering evacuations but are dependent on information and fire updates from the province.

On a related front, experts are looking south of the border for ideas on how to better protect municipalities and homes in Canada's forests from wildfires.

A non-profit group wants to use the Firewise Communities USA program as a model for Canada, but warns long-term success will depend on sustained funding from Ottawa.

The Canadian version, called FireSmart Canada, is designed to provide a national standard of wildfire prevention information to communities and homeowners across the country.

Conditions in Alberta are already so dry this year that the province moved up the start of its fire season by one month to March from April.

In December the province announced $1.2 million in grants to communities as part of its own FireSmart program.