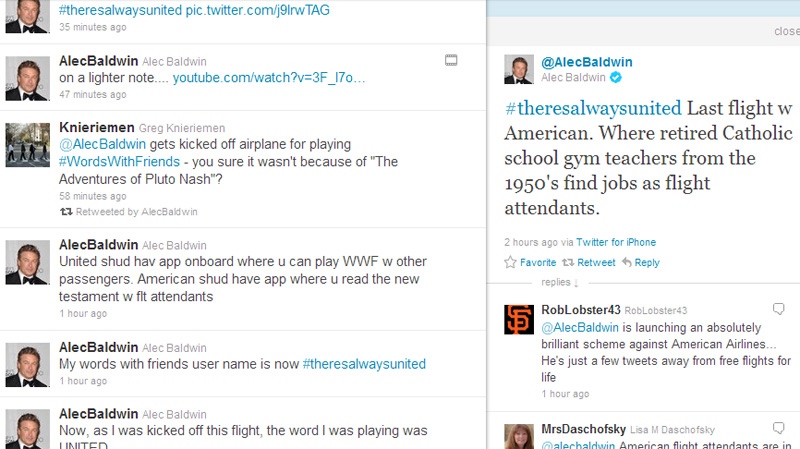 Alec Baldwin tweets about getting kicked off a flight on Tuesday, Dec. 6, 2011.

Alec Baldwin's image as a charming Hollywood star is taking a beating after the actor was booted from a plane on Tuesday by a flight attendant at Los Angeles International airport for playing a game on his cellphone.

The actor directed a heated Twitter tirade at the flight attendant for removing him from the New York-bound flight. The action was taken after the "30 Rock" star refused to stop playing a game called "Words with Friends" as the plane was about to depart for New York.

Baldwin, a prolific Twitter user, took to the social media site to vent, saying a "flight attendant on American reamed me out 4 playing Words With Friends while we sat at the gate, not moving."

Baldwin also tweeted that it would be his last flight with American, despite the fact that they show "30 Rock" for in-flight entertainment.

It's not the first time that the public has witnessed Baldwin's temper.

The actor made headlines in 2007 after a voicemail was leaked of the actor verbally disciplining his daughter, who was then 11 years old. That rant came during Baldwin's nasty divorce from actress Kim Basinger.

Asking a passenger, however, to turn off their cellphone is normal procedure, particularly before flights back away from terminals. According to reports from passengers, Baldwin disregarded the flight attendant's requests and went into the bathroom, supposedly to continue the playing his game.

For those unfamiliar with it, "Words with Friends" is played on a Scrabble-like game board. Players compete online to score the most points by building words with board tiles.

Baldwin himself has called "Words with Friends" an "addicting" game.

"He loves 'Words with Friends' so much that he was willing to leave a plane for it," said Baldwin's spokesman, Matthew Hiltzik.

Some passengers, however, were clearly unimpressed with the actor's actions, telling reporters later that Baldwin was inconsiderate and delayed the flight.

American Airlines has also issued a response to Baldwin's tirade on its Facebook page.

In it, they refer to Baldwin as "an extremely vocal customer who has publically identified himself as being removed from an American Airlines flight on Tuesday, Dec. 6."

The post explains the FAA regulations, which all airlines must enforce. According to those regulations, cellphones and electronic devices are allowed to be used while an aircraft is at the gate and the door is open for boarding. When the door is closed for departure and the seat belt light is turned on, these devices must be turned off for taxi-out and take-off.

"This passenger declined to turn off his cellphone when asked to do so at the appropriate time," American Airlines explained.

The air carrier also called this passenger "extremely rude to the crew" and claimed they used "offensive language" and inappropriate names" when speaking to these employees.