83 rescued from floating restaurant that broke away 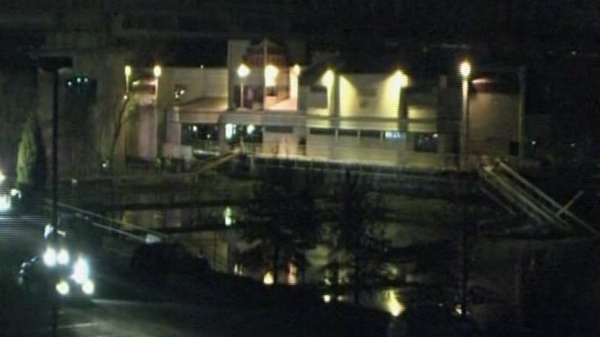 Jeff Ruby's Waterfront restaurant broke free from its dock on the Ohio River with at least 150 patrons on board. The restaurant is currently lodged under the Clay Wade Bailey Bridge, which is keeping it from drifting down the river.

COVINGTON, Ky. - A seafood eatery aboard a barge broke from its moorings on the flood-swollen Ohio River, then drifted downriver during the dinner rush before emergency crews rescued 83 patrons using a precarious gangplank of ladders and ropes, authorities said Saturday.

Covington Fire Department Capt. Chris Kiely said diners at Jeff Ruby's Waterfront restaurant used cellphones to call for help Friday night as the restaurant floated about 100 feet (30 metres) downstream. Everyone on board, including former Cincinnati Bengals star Cris Collinsworth, was safe after the hours-long rescue, Kiely told The Associated Press. All were led off one at a time, wearing life jackets.

TV footage of the rescue showed dinner patrons pacing aboard the barge as firefighters put up the makeshift bridge of ladders that spanned swirling, debris-filled water. Work boats edged close amid the flashing lights of fire trucks nearby. Patron Kathy Kinane told the AP on Saturday morning that she and her husband had been finishing their dinner with another couple when they felt a bump. Her husband, Bill, looked out the window and saw that the usually stationary boat was moving.

By then, a crowd had gathered by the exit. The walkway ramp had broken loose from shore. But rescuers and tugboats arrived quickly, and the fact the power stayed on helped prevent a panic, she said. Outside, the current was moving very quickly, though the Kinanes hadn't been concerned about eating there because they had been there before when the river had risen, she said.

The Kinanes, frequent patrons of the restaurant, had worn snorkels and masks when they arrived to surprise the manager. They returned the gear to their cars -- though Kinane joked they should have kept it with them.

Everyone on the boat had been completely cut off because all the gangplanks were torn away or damaged, Kiely said by telephone.

Emergency crews strapped the life jackets on those whose dinner of shrimp and seafood was abruptly interrupted. Women were taken to shore first, across the improvised ladder bridge, Kinane said. She said she had to take off her heels to make her way out.

Kiely, after returning from the rescue, said he saw Collinsworth -- the former Bengals star wide receiver and NBC television pro football commentator -- among those rescued. Collinsworth, who was a star at the University of Florida, has long been associated with Ruby, who offers "Steak Collinsworth" at several of his restaurants.

On Saturday morning, efforts were continuing to keep the restaurant secured. Tree limbs and other debris filled the water and garbage piled against one end of the restaurant.

Rob Carlisle, one of the owners of C&B Marine of Covington, directed efforts by one of his company's towboats to secure the front end of the restaurant.

He told AP the restaurant had become wedged against the Clay Wade Bailey Bridge, one of several linking Cincinnati with northern Kentucky.

"If the bridge wasn't there it could have travelled down the river quite a ways," he told the AP. Light traffic moved across the three-lane bridge, as did trains on an adjacent track.

Carlisle said authorities were discussing the possibility of a crane on a barge being brought in to help put the restaurant back in place as river levels permit in coming days.

Two other waterfront restaurants in Newport, Ky., had closed recently because of high waters from heavy rains. The Ohio River already was above flood stage and was expected to crest at 4 feet to 5 feet (1.2 to 1.5 metres) above flood stage. Low-lying areas just east of Cincinnati on the Ohio side have experienced some moderate flooding.

The restaurant is one of several along the river, on the Kentucky side just opposite Cincinnati.

Calls by the AP to phone numbers listed for the restaurant and restaurateur Jeff Ruby were not immediately returned early Saturday. He owns or operates several restaurants in Cincinnati and surrounding areas.