Days before lawyers from the City of Toronto and Uber appeared in court to deal with an injunction against the ride-hailing service, two local taxi companies released new mobile apps.

The apps would give customers the power to book a ride, track their cab and pay through the app itself. Sound familiar?

In May 2015, Toronto’s Beck and Co-op Cabs were ready to compete.

Beck’s app, released on May 20, is billed as “Canada’s first taxi-company app with in-app payment, map views and many more features…” 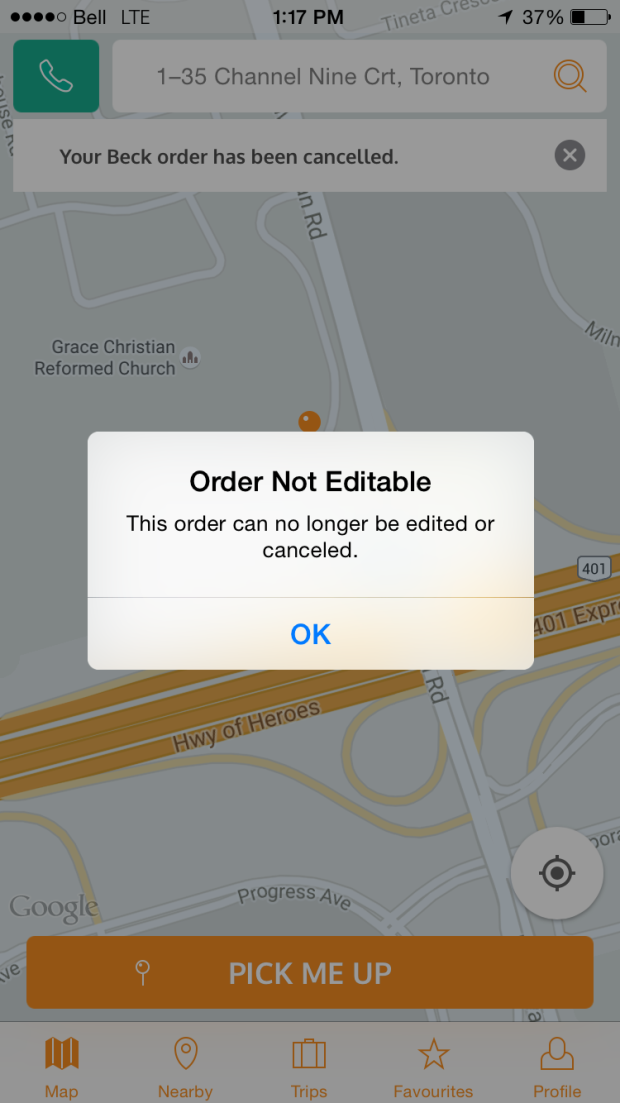 Testing out the app, it doesn’t seem to compare as well. The Beck app doesn’t show the location of nearby cabs (until a booking was made), and an attempt to change a booking prompted an error message that read “Order Not Editable."

During one of my attempts to book a cab, I received a call back from a friendly Beck agent because I didn't specify an address, I had just dropped the "Pick Me Up" pin at an intersection (and the app didn't detect a nearby address). The agent on the phone did tell me that humans dispatch the cab drivers, not the app -- much like the Beck app in 2012.

The app, however, did provide a fare estimate.

Co-op’s ‘GATA Hub’ app (get a taxi anywhere) was announced Friday and is a better solution. It provides fare estimates, advanced cab tracking and in-app payments. Reviews left in the App Store are favourable.

With the case in court, Uber launched a social media campaign Monday to build support for its ride-hailing service in Toronto.

Early Monday afternoon, the hashtag #uber4to was trending on Twitter in Canada.

Most tweets marked with #uber4to praised the convenience and affordability of Uber rides.

Some posts, however, raised concerns over safety and pricing.

In an ironic twist captured by one Twitter user, several cab drivers appeared to be protesting the very service they may be active on.

That awkward moment when #Toronto cab drivers protest #Uber at City Hall, but forget to turn it off first... #Uber4TO pic.twitter.com/OC04MPybJw

When asked how many “normal” taxi drivers use Uber, company spokesperson Susie Heath told CTVNews.ca that “thousands of drivers in Toronto have partnered on the platform as a new way to earn.”

So much support for a service tangled in legal and policy proceedings may be a testament to its convenience, but Uber isn’t in top gear just yet.

Despite customer praise shared on social media, Uber continues to run into trouble with policymakers.

In Ottawa, some UberX drivers have been fined by bylaw officers while Montreal’s mayor said he believes UberX is illegal.

In a statement issued last October, the City of Toronto said UberX – a version of the app that allows everyday drivers to pick up fare-paying passengersin their own vehicles -- violates municipal bylaws and “may post a serious safety risk.”

Uber continues to claim it is a technology company, connecting riders with drivers, while city regulators across Canada say it is an unregulated taxi service.