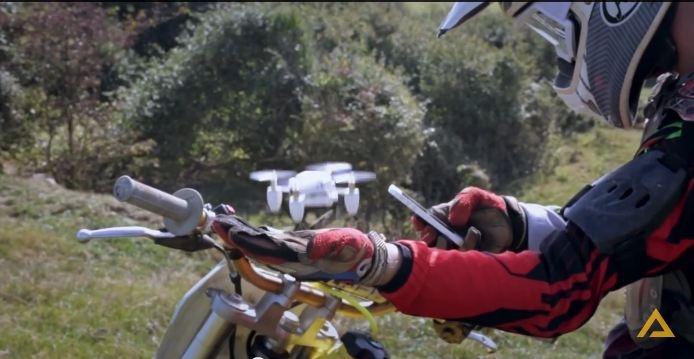 A dirt bike rider appears to use a self-flying drone to snap a dronie, a photo or video captured by a drone. (YouTube/Zano)

As you hike through Algonquin Provincial Park or ski down a powder bowl in Whistler later this year, look out for the drone following you from above.

A new wave of autonomous drones fitted with self-tracking cameras appear destined to change the way we record our memories.

Just as a loyal lapdog won’t leave its owners alone, the devices -- capturing photos dubbed “dronies” -- are capable of tracking people’s movement. As the subject bikes, hikes or boats along, the recording drones will automatically follow the action.

From Lily to Zano, several dronie-inspired start-ups have been littering crowdfunding websites with their pitches. In return, they’re getting enough support from the public to build their self-shooting drones – and still have enough cash left over to buy a real plane.

Available for preorder at roughly $323, Zano is one of the most affordable dronie tools we’ll see on the market.

The company’s launch plans follow an incredibly successful Kickstarter campaign. Its creators set a respectable goal of approximately $237,000, but instead raised almost $4.5 million from 12,075 backers.

Slated to ship in July, the Zano is about the size of a grapefruit and can fly for 10-15 minutes.

In order to keep you in frame, it communicates back to your Android or iOS device via a Wi-Fi connection.

At the other end of the spectrum is the US$1,349 Hexo+. While the price tag is a little steep, footage captured by this GPS-linked drone is incredible and it’s available for order right now.

While both the Zano and Hexo+ drones are more expensive than your typical selfie stick, it’s hard to argue with such stunning shots.

Recently, it’s become the norm to see snowboarders with a GoPro at the end of a pole, or mountain bikers with an action camera mounted to their handlebars. Don’t forget about Fido; pet owners are even attaching action cameras to their dogs.

Selfie sticks, however, can get in the way of action. Cycling star Alberto Contador appears to have slapped down a fan’s selfie stick during a stage of this year’s Giro d’Italia.

They’re also illegal at several tourist hotspots,in Canada and across the rest of the world.

That raises questions around regulations: How will we prevent Johnny’s and Jimmy’s dronies from colliding in the terrain park? Can Janey’s and Sally’s drones avoid each other along the mountain bike path?

It’s already bad enough that commercial passenger jets are having near-misses with drones during takeoff and landing.