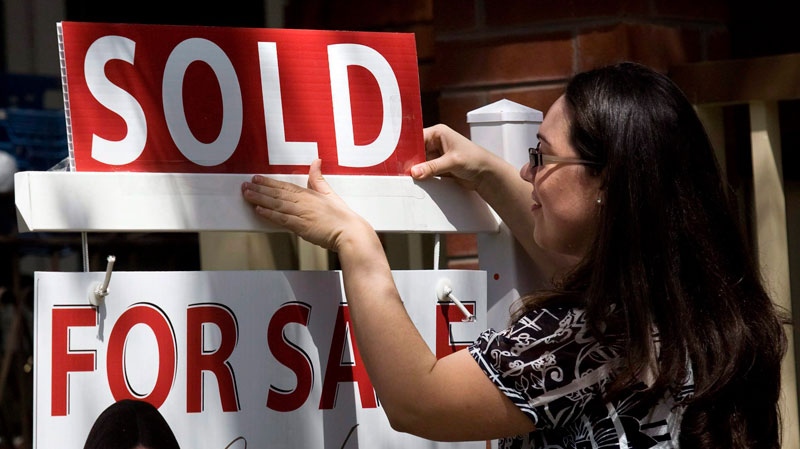 A real estate agent puts up a 'sold' sign in front of a house in Toronto on Tuesday, April 20, 2010. (Darren Calabrese / THE CANADIAN PRESS)

Gazing into its crystal ball, Re/Max forecasted in a report released Tuesday that housing markets will stabilize in most major Canadian cities and that the value of homes will climb even further in the coming year.

Re/Max's housing market outlook for 2011 contains mostly positive predictions but the agency doesn't expect the number of sales to increase, extending a downward trend that emerged in 2010.

Canada's housing market is coming off a 12-month period that recorded about 441,000 sales, five per cent less than 2009.

Housing values climbed despite the cool-down. Lower inventory propped up prices in the midst of weaker demand, the report states. Most areas reported an upswing in average price, ranging from just under one per cent to 15 per cent.

Re/Max is predicting a repeat of 2010. The brokerage expects about the same number of homes to sell in 2011 but sees greater stability and homes fetching more cash in most major centres.

The agency is also forecasting the national average price to climb three per cent to $350,000.

"Low interest rates and improving consumer confidence levels should stimulate home-buying activity at all price points next year," Dansereau said in a statement. "Overall gains will be more muted – a welcome reprieve for purchasers."

British Columbia could be the most active market. The report suggests a 10 per cent increase in sales in Vancouver, eight per cent in Victoria and six per cent in Kelowna. Re/Max is calling for a big gain of five per cent in Windsor, Ontario after a significant economic downturn.

In terms of housing values, St. John's is expected to lead the charge with an eight per cent increase in average prices. Five per cent gains are also forecasted for Vancouver, Kelowna, Regina, Saskatoon, London-St. Thomas, Ottawa, Sudbury and Montreal.

The report examines real estate trends and developments in 26 major centres across Canada.

In 2010, Kitchener-Waterloo, Quebec City and St. John's saw the biggest spikes in average price, while markets in Eastern Canada, including Hamilton-Burlington (Ontario), Sudbury (Ontario), Windsor (Ontario), Moncton (New Brunswick) and Prince Edward Island were the only ones to buck the downward trend in homes sales, Re/Max found.

Re/Max's report conflicts the tone of a gloomy forecast released in November by the Canadian Real Estate Association.

The CREA expects home sales to decline by nine per cent in 2011 due to slow economic and job growth, muted consumer confidence and interest rate increases.